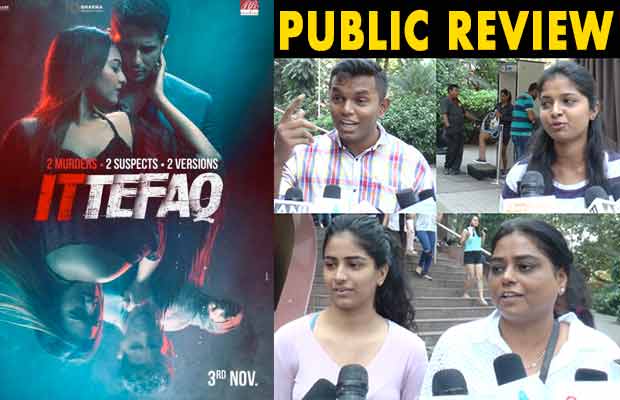 Red Chillies Entertainment and Dharma Productions co-venture Ittefaq hit the big screens today. Sonakshi Sinha, Sidharth Malhotra, Akshaye Khanna starrer was previously thought to be a remake ofYash Chopra’s Ittefaq. When we saw the movie for ourselves we were pleased to know that the plot is only loosely adapted from the Rajesh Khanna and Nanda 1969 starrer.

Dev Verma (Akshaye Khanna) is in charge of investigation of a double murder case in Mumbai. Well-known novelist Vikram Sethi (Sidharth Malhotra) and a young homemaker Maya (Sonakshi Sinha) are the witnesses and prime suspects in a double murder. Both have different versions of happened on the night of the murder. Torn to choose between the two believable versions— Dev is determined to find the truth.

As the first show ended and the audience exited the cinema halls, here is what they had to say about the movie:

The audience was pleasantly surprised at the duration of movie— 1 hour 47 minutes. But the lack of songs in the thriller did not sit with the public well. Performances of all the actors— Sonakshi Sinhaand Sidharth Malhotra were applauded. But Akshaye Khanna’s portrayal of a driven investigating officer stole the show.

Overall the response to the movie has been good as the occupancy for the morning shows has been 10%-15%. It remains to be seen if the movie picks up pace during the weekend.​