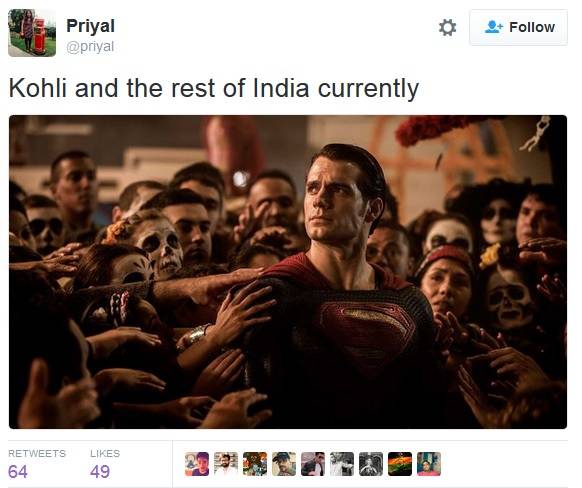 [tps_footer]The handsome hunk Virat Kohli emerged as a hero for the entire country after his magical performance during India vs Australia ICC World T20 2016 match that took place on March 27 in Mohali. The entire country was in praises for Virat Kohli, after he scored 82 off just 51 balls and made India make its way to the semi-final.

Virat Kohli’s as usual magnificent performance left everyone spellbound. The handsome hunk took over the match single handed and effortlessly even when the situation looked tough against Australia team. Smiles and celebrations continued all over the country but like always fans came out with their humour on social media platform. Over Virat‘s outstanding performance, fans created hilarious memes. Minutes after India won the match, Virat took social media by storm. This feature is purely meant for fun and entertainment purposes and were shared by fans on social media over team India’s victory.

Take a look at Virat Kohli‘s funny memes that will make you die of laughter![/tps_footer]