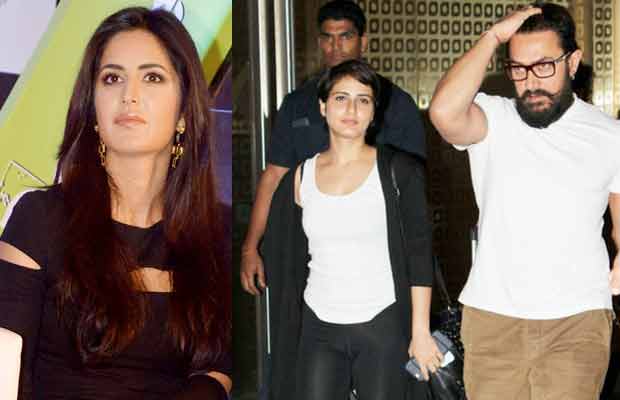 Reportedly, Katrina Kaif is upset with Aamir Khan because of Fatima Sana Shaikh!

The Bollywood actor Aamir Khan is a part of the film Thugs Of Hindostan. The film was first announced to star Katrina Kaif and Amitabh Bachchan. And it was later that Fatima Sana Shaikh was also roped in for a role in the film.

It is since then, that there have been speculations of Aamir casting Fatima in the film due to his bond with her. They have worked together in last year’s blockbuster Dangal. The 25-year old actress had played the role of Geeta Phogat, the actor’s daughter.

But Aamir’s wife Kiran had put an end to all such rumours. Talking to PTI, she had said that it wasn’t Aamir’s decision alone. She also said that the producer Aditya Chopra and the director Vijay Krishna Acharya were the main people responsible for the cast.

Now there are rumors that Katrina Kaif is upset with Aamir Khan. And it is due to the actor giving more attention to Fatima. Reportedly, Fatima has been given more screen space that the Jagga Jasoos actress, which has upset Katrina.

Well, neither of the stars have spoken on the matter!

Thugs Of Hindostan is reportedly based on the novel, ‘Confessions Of A Thug’. The film is going to be set in the back drop of Indian pre-independence period of 1830s where the notorious thugs torture and murder the travellers for money and other valuable stuffs.

Going to be directed by Vijay Krishna Acharya, the film is a Yash Raj Production venture. The film has already gone on the floors and the Malta schedule has recently been wrapped up. It is expected to release in Diwali, next year.