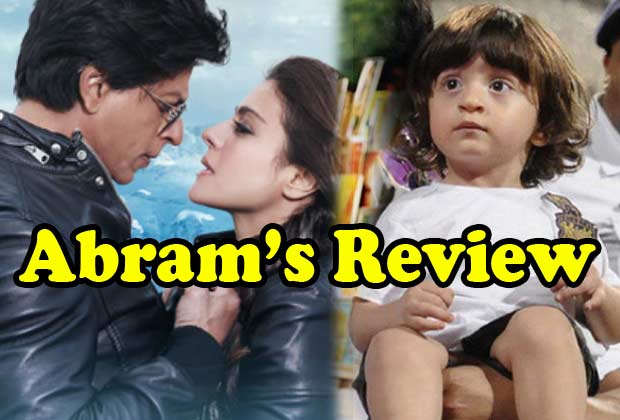 [tps_footer]Shah Rukh Khan is leaving no space unexplored for promoting his upcoming film ‘Dilwale’. The superstar nonetheless has already received his first ever review for the yet to be released film ‘Dilwale’.  The Rohit Shetty directorial film stars actors Kajol, Varun Dhawan and Kriti Sanon in main leads apart from SRK. The entertaining flick is just a few days away from its release and the first review has already made its way.

As we all know Shah Rukh Khan’s prized possession is none other than his little toddler AbRam. The King Khan never refrains from flaunting his love for the little bundle of joy. Well, this time AbRam has done something for father Shah Rukh Khan.

King Khan’s wife Gauri Khan recently confessed about AbRam’s reaction to the movie ‘Dilwale’. The star wife said, “AbRam clapped and was engrossed throughout the film. He enjoyed each and every part of the movie. So if he can react so happily, I’m sure everyone would like it as well.”

The highly talented Gauri Khan was all confident in interpreting AbRam’s review for ‘Dilwale’. Well, seems like AbRam is all smiles with papa SRK’s much awaited movie and has also given the film full marks.

The much awaited film ‘Dilwale’ is a power packed entertainer. The movie is one of the most awaited films of the year and is also in the limelight as it will bring back the most iconic pair of the Bollywood industry Shah Rukh Khan and Kajol together on the silver screen after many years.

‘Dilwale’ has been making headlines for its impressive star cast and also the songs of the movie have done wonders. The entertaining flick is all set to release on December 18th, 2015. Moreover, Shah Rukh Khan starrer ‘Dilwale’ will also clash with Sanjay Leela Bhansali’s historic drama ‘Bajirao Mastani’ which releases on the same date.