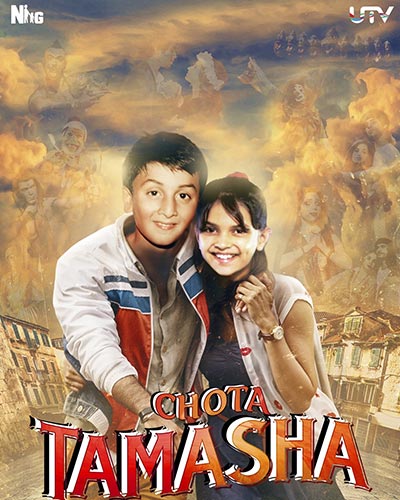 As a treat to all the fans of Ranbir Kapoor and Deepika Padukone, team Tamasha has released an edited version of its poster.

The newly released poster bares the childhood faces of Ranbir and Deepika.

The poster is ought to be a perfect treat to all the admirers of this particular pair who will get a chance to see the childhood glimpse of both the actors on the poster.

The poster sure does make for an endearing gesture undertaken by Team Tamasha revisiting childhood on the perfect occasion of Children’s Day.

The films has been the most talked about ever-since the unison of Ranbir and Deepika for the film made headlines, the films music further added fuel to fire and the ongoing promotional activities further add buzz to the film.

‘Tamasha’ brings two ex-lovers back on the silver screen again and what more can you can ask for from director Imtiaz Ali. The film decodes relationships and much more. The trailer already makes us to watch more from the film and as we all know Ranbir and Deepika are known as golden pair of the industry and excitement among the fans to see them together once again is high!

Presented by UTV Motion pictures and Nadiawala Grandson Entertainment, Tamasha is directed by Imtiaz Ali and produced by Sajid Nadiawala. The film is slated to release on November 27, 2015.