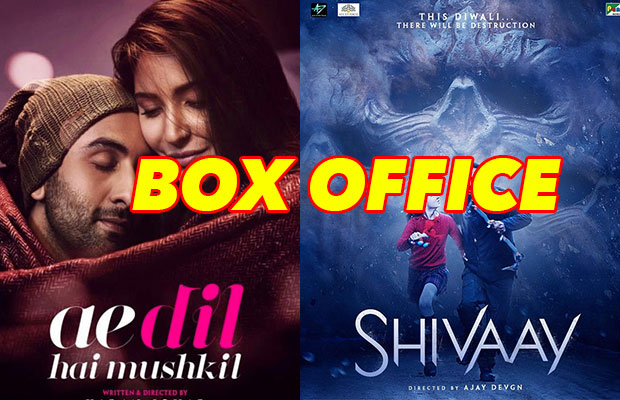 Today is crucial for two big films- Ranbir Kapoor- Aishwarya Rai Bachchan’s Ae Dil Hai Mushkil and Ajay Devgn’s Shivaay. This is going to be one of the biggest clashes of the year at the Box Office. After much of controversies, debate and lot more, finally, Karan Johar’s Ae Dil Hai Mushkil starring Aishwarya, Ranbir, Anushka, and Fawad has released today in a clash with Shivaay.

Ae Dil Hai Mushkil trailer had a decent review but the music of the film has hit the right chord and has topped the charts. The film is heavily relying on the hype music created among the masses and the same ensures a good opening at the Box Office.

Shivaay, on the other hand, is Ajay Devgn’s second directorial after U,Me Aur Hum. The trailer of the action-thriller film has got a huge response. However, the music of the film has been average as it failed to create the hype needed. Shivaay has a powerful storyline and its breathtaking camera work and visuals are the key elements of the film.

Considering both the films are of different genres, let’s see what the audience has picked to watch.

CLICK NEXT TO KNOW WHO WON THE OPENING DAY BOX OFFICE BATTLE!