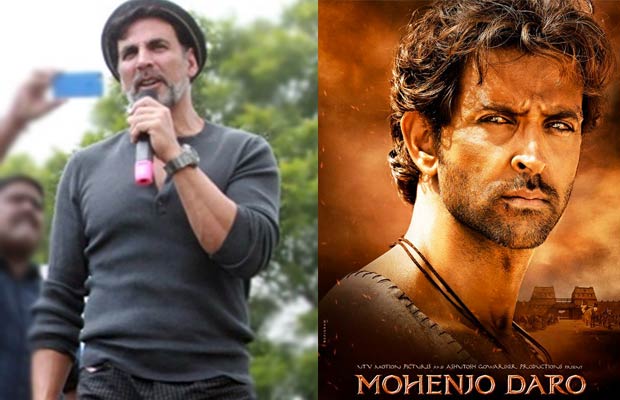 [tps_footer]Akshay Kumar is riding high on success as his third film of 2016 is almost a hit. His latest release Rustom is running successfully at the box office. Rustom clashed with Hrithik Roshan’s magnanimous Mohenjo Daro. Well, as far as box office run, Rustom collected Rs 49.75 crore whereas Mohenjo Daro made a collection of Rs. 30.25 crores in its three days of release.

Well, people were looking forward to this huge clash. Both are superstars and their films are larger than life. When Akshay was questioned about the clash and his film doing well than Hrithik’s he stated that he hates the word clash. He further added that he wants everybody’s film to work as people work hard on it. The actor also revealed that the Bang Bang actor has not yet congratulated him. The OMG actor said that just because their films are releasing together it won’t change their equation. Both of them will always be neighbours and will hang out and dine together.

Akshay also quoted that he hasn’t seen Mohenjo Daro yet but will soon watch the film as soon as he gets time. On asked what he felt when the industry promoted Rustom, Akshay said that it was interesting to see other stars promoting his film on social media. He further stated that this trend should continue.

Akshay disclosed that he was quite nervous before the release as he was worried what will be audiences’ reaction on Rustom. He smiled and quoted that there are two-three scripts coming to him every day, but only a lucky person is enough to get the good one.

Well, Rustom might soon touch the 100 crore mark, making it Akshay’s 3rd blockbuster film of 2016. His previous films Airlift and Housefull 3 also made a collection more than 100 crores. The actor is now working on the second schedule of Jolly LLB 2. Also, he will be soon working in Vipul Shah’s Namastey England, a sequel to Namastey London.[/tps_footer]