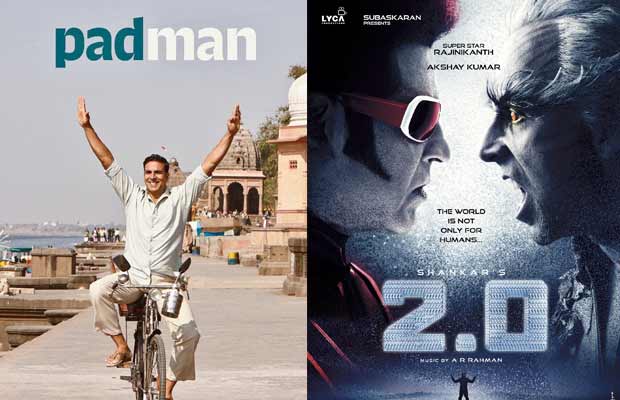 Akshay Kumar had left the fans and industry dumbstruck recently. When it was announced that Twinkle Khanna produced Padman and Rajnikanth’s 2.0 both starring Akshay Kumar would clash on the box office in January 2018.

The reason for shock apart from Khiladi Kumar starring in both huge banner movies was that Padman’s release was preponed to January 26th, 2018 from April 13th 2018. Also, 2.0 is now the biggest film in the Indian market.

Anyway a clash of two huge banner movies with a multi-starrer cast is perceived as a bad idea for the performance of both the movies, especially when both movies have the same actor!

In a recent interview for Mid-day Akshay Kumar stated that he is surprised with the circulating news. He asked why he would want two of his films two clash. However, at the same time he said that 2.0’s release date is not decided yet. He also admitted if the makers of 2.0 decide to release Rajnikanth, Amy Jackson starrer on Republic Day then he would definitely not release Padman on that day.

Padman is inspired by the life of a man who revolutionized and spread awareness about the concept menstrual hygiene in rural India— Arunachalam Muruganantham.

Coimbatore‘s Arunachalam Muruganantham in his drive for providing basic hygiene products for women created an efficient low-cost sanitary napkins machine. The machine manufactures sanitary pads for less than a third of the cost of mainstream commercial sanitary pads. This sanitary pad making machine has been installed in 23 of the 29 states of India. Currently Muruganantham is planning to expand the production of these machines to 106 nations.

R. Balki directed, Sonam Kapoor and Radhika Apte starrer movie is inspired from a short story written by Twinkle Khanna in the book, ‘The Legend of Lakshmi Prasad’.