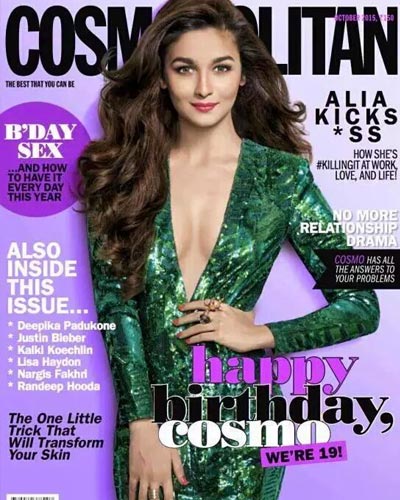 With ‘Shaandaar’ releasing on 22nd October, things have been pretty busy for Alia Bhatt. From promotions to photoshoots, Alia has been doing everything.

Alia Bhatt is featured on this month’s cover of ‘Cosmopolitan India’. In the honour of Cosmopolitan’s 19th anniversary, dressed in a shimmering green outfit, Alia is making heads turn with this hot look. Styled by Cosmopolitan India’s fashion editor Amandeep Kaur, Alia is seen wearing Balmain for H&M.

Another sneak peek from the special edition of the magazine was posted by designer Nachitket Barve on his instagram. Alia is seen wearing an ‘Armour Jacket Dress’ from Chiaroscuro Collection.

The actress along with all this, sizzles on the cover of top magazines almost every month. Last month, she was featured on the cover of ‘Harper’s Bazaar Bride’. Styled by Mohit Rai, Alia wore a gorgeous Monisha Jaisingh outfit adding a diamond and ruby necklace by Nirav Modi.

We found the cover absolutely ravishing. What are your thoughts on Alia’s glamorous look?