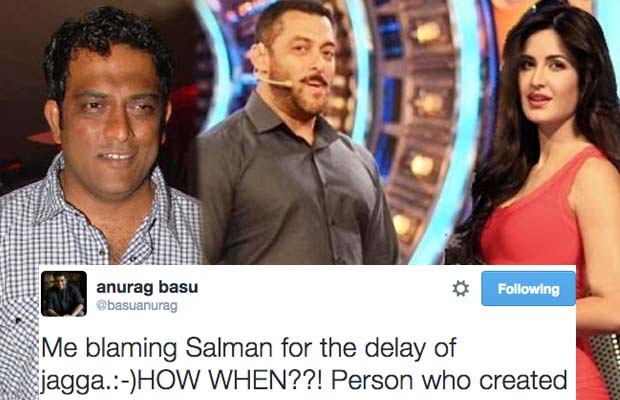 [tps_footer]Ranbir Kapoor and Katrina Kaif’s upcoming film ‘Jagga Jasoos‘ has been getting delayed for many wrong reasons since its inception. With too much of delay in the shooting of the film, lately, it was reported that the January schedule of the film is too postponed. Well, the blame on the same was reportedly put on Salman Khan.

Yes, according to reports, director Anurag Basu has blamed Salman Khan for the delay in the shooting of his film. It is also said that, Anurag Basu blames Katrina and Salman’s recent meet for the stoppage of shooting.

With all sort of reports taking rounds on Anurag Basu’s accusation on Salman Khan, now the director himself has opened up on the same. Jagga Jasoos director Anurag Basu took to his twitter handle to clear the rumours by tweeting that he never blamed Salman Khan for the delay.

He tweeted, “Me blaming Salman for the delay of jagga.:-)HOW WHEN??! Person who created this news shd write fiction we need good writers in the industry.” 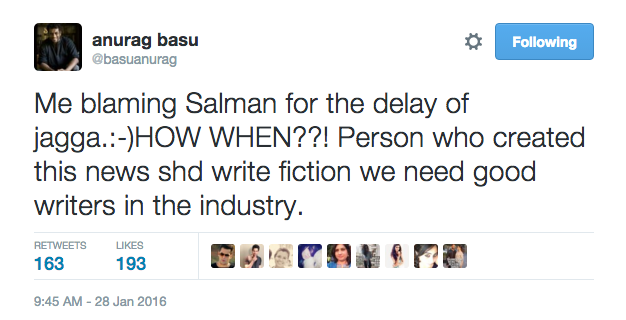 Well, the real reason for the delay in shooting of the film is still unknown. But it is assumed that after Katrina met Salman Khan, both Ranbir and Katrina who have parted their ways now, stopped shooting for the film together. Also, the entire team of ‘Jagga Jasoos‘ was supposed to fly to Morocco by the end of this month, but reportedly it has been now pushed to March.

Talking about the film, the film is going to be musical journey with more than 20 songs. Ranbir Kapoor will be seen playing the role of a detective. The film tells the story of a teenage detective in search of his missing father. Ranbir and Katrina will be seen in funky and unique look for the film![/tps_footer]