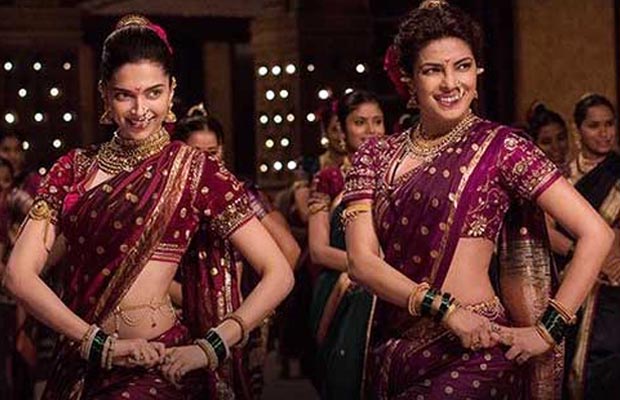 Sanjay Leela Bhansali directorial ‘Bajirao Mastani’ is much awaited by the audience. The historical film stars actors Priyanka Chopra, Deepika Padukone and Ranveer Singh in lead roles. The movie is based on the warrior Peshwa Bajirao.

The much in limelight movie is already ready with its enthralling tunes. The first song of the film Deewani Mastani has already carved a massive fan following. The song ‘Deewani Mastani’ features Deepika Padukone primarily with mesmerizing dancing sequences and also features Ranveer Singh and Priyanka Chopra at their expressive best.

Well, the second song from the film ‘Bajirao Mastani’ has finally been unveiled. The song Pinga which was much talked about during the shoot of the film has finally made its grand entry. The traditional and cultural track Pinga features Deepika and Priyanka in a dance face off. The song features the two actresses wearing typical traditional attire with loads of ethnic jewelry. The song was said to be a replica of ‘Dola Re Dola’ which was a dance sequence between Aishwarya Rai Bachchan and Madhuri Dixit Nene in the film ‘Devdas’.

Even though the song Pinga has a wonderful lavni essence to it, the song fails to impress the ears as the lyrics are not that hummable. The visuals are creative enough to grab your attention, but are also monotonous at the same time. The two actresses dressed in navvaris are looking mind blowing but fail to carry off the track in an effortless manner.

Pinga is crooned by Shreya Ghoshal and Vaishali Made. The choreography is by Remo D’Souza. Even though it was being compared to Dola Re Dola, Pinga falls short in proving itself.

Directed by Sanjay Leela Bhansali, ‘Bajirao Mastani’ is all set to hit the screens on December 18, 2015.