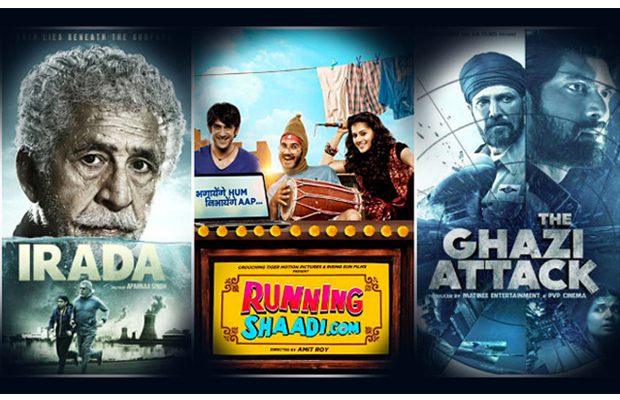 This week, three films “The Ghazi Attack”,” Irada” and “Running Shaadi” have released at the Box office. All the three films have failed to draw the audience in the theaters though positive reviews somehow pulled in audiences by the evening and night shows on day 1. The Ghazi Attack, which is said to be the first-ever Indian film to be based on underwater war, has been quite better than the other two releases.

The Ghazi Attack starring Rana Daggubati, Taapsee Pannu, Atul Kulkarni, Late Om Puri and Kay Kay Menon in pivotal roles, had earned Rs 1.25 crore nett approx on its first day. However, the film managed to show a growth of around 30% on Saturday. The film collected Rs 2.25 crore nett approx on day 2, taking the total collection to Rs.3.50 crore nett. As Karan Johar is backing the film for its Hindi release, the audience footfalls would entirely depend on the positive word of mouth spreads over the weekend.

On the other hand, Taapsee Pannu and Amit Sadh‘s Running Shaadi had earned Rs 10-12 Lakhs nett approx on day one and is still in a tough spot on day 2. The rom-com managed to earn Rs 18-20 Lakhs on day 2, which is surely disappointing.

Irada and Running Shaadi, the collections of both the films have stayed under 50 lakhs, which is quite sad considering the talented actors like Arshad Warsi, Naseeruddin Shah and Taapsee. respectively.