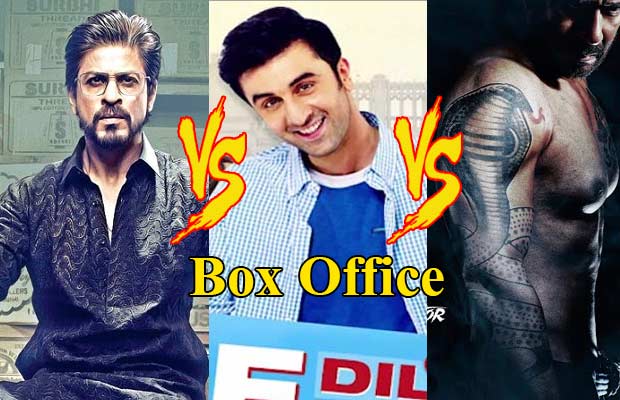 [tps_footer]After the massive war between ‘Bajirao Mastani’ and ‘Dilwale’ last year, this year too the situation is going to be similar and massive. It was earlier reported that Shah Rukh Khan starrer film ‘Raees’ is going to clash with Salman Khan’s ‘Sultan’. However, after loads of speculations, it is now clear that the two super khans will not clash at the box office.  Well, the tale has taken a new turn with another breathtaking war on the box office.

As we all know Shah Rukh Khan has always targeted the Diwali spot for his big releases. This year too, SRK will be doing the same with his upcoming film ‘Raees’. Reports suggest that ‘Raees’ will be clashing with Ajay Devgn’s ‘Shivaay’ and also Karan Johar’s ‘Ae Dil Hai Mushkil’. All the three big movies are set to battle it out on the box office this Diwali.

The silent war between Ajay Devgn and SRK has been known to all. It is reported that Devgn is not at all happy with this change of plans as he will now have to fight it out with two other films instead of one. Ajay Devgn’s ‘Shivaay’ is currently ongoing and the film is expected to be massive in terms of execution. Coming to Karan Johar’s directorial ‘Ae Dil Hai Mushkil’, the film is already in the limelight for its star cast of Ranbir Kapoor, Aishwarya Rai Bachchan, and Anushka Sharma.

Nevertheless, Shah Rukh Khan’s film ‘Raees’ has already made a mark with its strong first glimpse. The Rahul Dholakia movie is highly awaited. Now whether this sudden development proves to be a hindrance for ‘Shivaay’ and ‘Ae Dil Hai Mushkil’ only time will tell![/tps_footer]