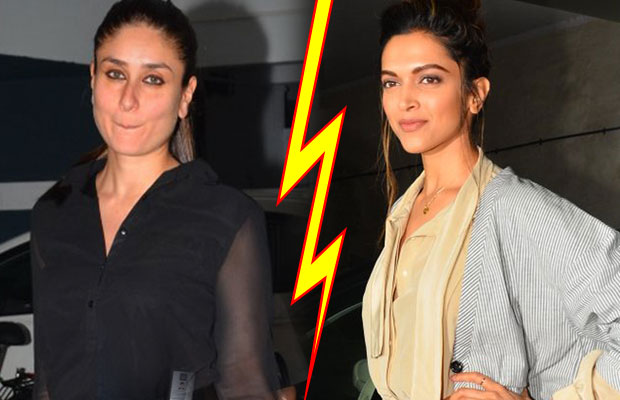 [tps_footer]Kareena Kapoor Khan is all set to welcome her baby in a few months. The actress is confidently flaunting her baby bump every now and then. Kareena who has always been in the limelight for her sensational statements is now miffed with actress Deepika Padukone. Deepika recently had commented on her engagement rumors saying, “I am not getting married and I am not pregnant.” Seems like, Deepika’s pregnancy stance has not gone down too well with Bebo.

It is being said that Kareena has taken Deepika’s statement personally. Kareena Kapoor is apparently irked because she thinks Deepika indirectly pointed out to her when she said she is not pregnant. Rumors suggest that Kareena Kapoor Khan is unhappy with Deepika Padukone’s statement because her comment implicates that actresses who are giving priority to their family are no longer serious about their business and they also scare the producers away.

The Ki and Ka actress who is still the most sought after star is miffed at the Tamasha starlet for her preconceived notions. A while ago Bebo gave a fitting reply to everyone who thought that she would take a break from her career because she is pregnant. Kareena expressed, “I’m pregnant, not a corpse. And what maternity break? It’s the most normal thing on earth to produce a child. It is high time the media backs off, and stop treating me any different than I ever was. Anybody who is bothered shouldn’t work with me… but my work goes on as is, like always. Stop making it a national casualty. We are in 2016, not in the 1800s. Probably, even at that time, people were way more civilized and normal than the way the media is behaving and speculating now.”

The beautiful actress also added “I’m just fed-up of people making it to be a death of some sort. In fact, it should be a message to a lot of people that marriage or having a family has absolutely nothing to do with my career.”

Well, Miss Padukone needs to be more careful about her generalizations and choice of words! On the work front, Kareena Kapoor Khan will soon be seen in the film ‘Veere Di Wedding’, whereas Deepika Padukone will soon start shooting for ‘Padmavati’.[/tps_footer]