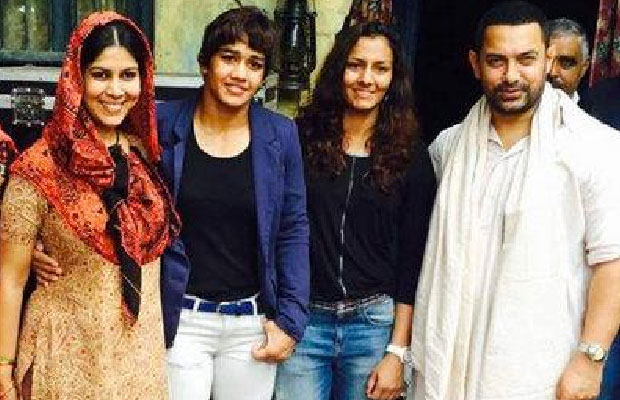 If Aamir Khan is doing a movie, he tries to make sure that no news, no inside input and certainly nothing about their looks leak from the sets. He is known to be quite a protective star when it comes to his movies and creating mysteries in the minds of the audience about them. Well this time we are lucky after all we have some exclusive photos of Aamir Khan and Sakshi Tanwar from the sets of ‘Dangal’.

After a long war on who will play the role of Aamir Khan’s wife, the makers of the film recently finalized ‘Bade Achhe Lagte Hain’ fame Sakshi Tanwar. Aamir Khan will be seen playing a father to four daughters in ‘Dangal’. While recently, Fatima Shaikh, Zaira Wasim, Suhani Bhatnagarand Sanya Malhotra had been finalized to play the roles of Aamir Khan’s daughters.

In the photo, we see Sakshi wearing a simple “salwaar-kameez”, she looks like a typical village house-wife. Aamir is seen wearing an all-white kurta-pajama. Both are looking like typical Indian villagers who have a very normal living environment. We can also spot the two young actresses Geeta and Babita who play the Phogat sisters in the photo.

Aamir Khan’s ‘Dangal’ is based on the life of former wrestler and coach Mahavir Singh Phogat who trained his three daughters and one niece for the Commonwealth Games. The shoot of Aamir Khan starrer ‘Dangal’ will soon go on rolls and the film is scheduled to release only next year. The ‘PK’ star will yet again charm the audience with his versatile performance in his upcoming movie. Directed by Nitesh Tiwari, ‘Dangal’ is slated for a 2016 release.

The recent poster released by the production team is liked by some and trolled by some; hence we are getting quite a mixed reaction from the audience. We all have pretty high hopes from an Aamir Khan movie.