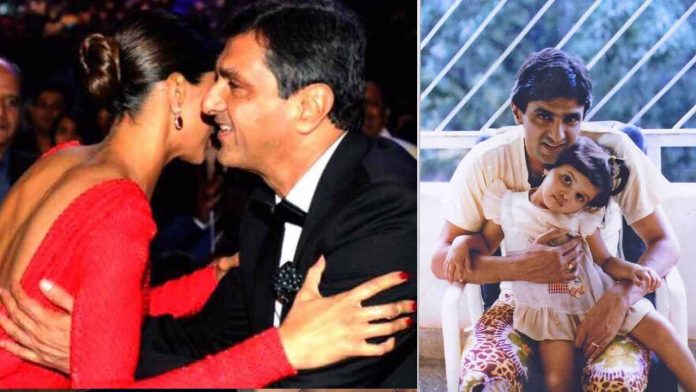 Bollywood’s leading lady Deepika Padukone who has always been close to her family spill beans on the special bond she share with them.

On account of Father’s day, Deepika Padukone shares on how her dad has been one of her strongest pillars throughout her life journey.

While talking about the things that Deepika has learned from her father, the actress shares, “The most important thing for us and for them in bringing us up then is being a good human being. I remember he said that you can have all the stardom and success in the world but if you are not a good human being you will never be remembered. If you are a good person then it trickles in everything else that you do”.

When asked about how she has been a contributor to her family, Deepika shares, “Yes, especially my father. In some ways he is quite fixated about doing things a certain way. But if Anisha and I have a different perspective, dad doesn’t dismiss it. He is more than happy to have a conversation with us. His keeness to learn is amazing!”

With this Deepika was titled the first actress to have entered the 300 crore club with a woman led film.

Deepika Padukone on her father’s take on all her film, shares, “He is ‘I love everything my daughter does’ or let’s put it this way ‘The excitement is always there. I hope haven’t disappointed him in the last couple of years, in terms of my film choices but I don’t think that he will never see wrong in something that I have done. He’ll always see something good only in what I have done. Like Ohh this was entertaining. The critics in the house are my mum and my sister, my sister especially”.

As Deepika’s family is Bangalore based, the actress has always made sure to take off time from her busy schedule to spend time with her family.

When asked about the one special thing Deepika and her dad does together, the actress shares, ”

One thing that brings immense joy to him is to see me relaxed no work tension, no telephone calls. Our idea of a special outing is to just sit and talk. Those moments are precious because gems come out of that. Sometimes, there is financial advice, most times, it is about catching up on what is happening in my life”.

While talking about the role that her dad has played in her success and failur, Deepika shares, “A huge role. Being an athlete means you’re DNA is completely different. I think as a professional athlete you are made up very differently mind, body and spirit. So it has been a huge advantage to have him, where he has had those experiences life that he has guided me and my sister so much. Yet at the same time not imposing on us, but more as who has an experience and in giving his children advice. Then it’s really been up to us if we have had to listen to him earlier on or we you know had his course at the back of our mind, he has still gone through what we have gone through in our life because sometimes we need to go through our own learning perks and then reflect back and say oh! yeah, dad was right. So it’s either way, but it depends on the situation. I think largely it definitely has you know I think there is a lot of his role in teaching, learning, above all of that he has been a huge influence in my life, my success especially”.

Deepika who has time and again proven to be a daddy’ girl wishes peace of mind and good health for him and nothing more than this.