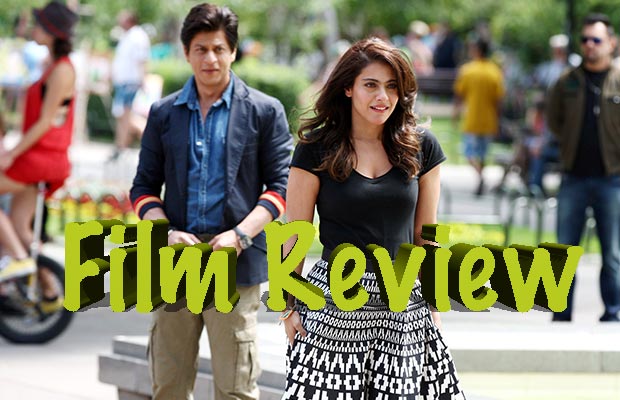 [tps_footer]It’s a rare Rohit Shetty film when you can actually count the number of cars destroyed (well, not exactly), but it’s definitely a Rohit Shetty film where every colour in the rainbow paints a happy, joyous and romantic scene. Shah Rukh Inexplicably two powerful Indian mafia dons (Vinod Khanna and Kabir Bedi) reside in, rule and compete with each other in Bulgaria. The ugliness of their rivalry peaks when their respective offspring fall in love with each other. Kali (Shah Rukh Khan) and Meera (Kajol) decide to put family disputes and enmity aside for the sake of their love. But the father’s have a different plan, leaving Meera and Kali’s love story incomplete.

Cut to 15 years later, Kali is now called Raj. Along with his younger brother Veer (Varun Dhawan), he lives a respectable life as a mechanic who remodels car in Goa. His two trusted henchmen have also remodeled their lives and live next door. Veer and his best friend (Varun Sharma) aren’t the brightest peas in the pod and skate through life without a care in the world or a meaningful question in their minds. It’s most likely a reflection of the puerile dialogues by Sajid-Farhad with some contribution from the silly and shallow script by Yunus Sajawal borrowing unashamedly from Love Actually and other romcoms.

It’s all bright colours, fast cars and jovial bonhomie, till Veer falls in love with Ishita (Kriti Sanon). And that’s when fate and destiny intervenes, and Meera reappears in Raj’s life. This plot point was almost as obvious as a convoy of Audis, BMWs etc hurtling down a Bulgarian highway waiting to be ambushed by a Hummer and other posh cars. Subtlety is the last thing you will find in a Rohit Shetty film. Everything is spelt out, underlined and then repeated in case you missed it. Sanjay Mishra and Johnny Lever are the supposed comic relief but honestly Mukesh Tiwari and Pankaj Tripathi deliver the funniest scene.

Sure there are a handful of really funny dialogues, like Raj referring to Mishra’s character Oscar as Puruskar and one or two one-liners scattered around (like Mishra’s Oscar who ends his sentence in rhyme), but this is mostly formula revisited – but not the Shetty variety, instead its taken the family drama route and fallen flat. Adopted children, feuding families, Boman Irani hamming as a Goa drug dealer, a checklist of showcase songs and foreign locations, and in spite of the budget so much still looks sloppy.

Dhawan tries to hard, Sanon makes no impact, Sharma replays his ‘Fukrey’ character, and Khan is rather enjoyable as the sinister, bearded and older Kali. Fortunately there’s Kajol to raise the mood several rungs. Not only does she look lovely, her acting is the perfect counterbalance to Khan. It’s their scenes, their track that just about makes ‘Dilwale’ bearable.