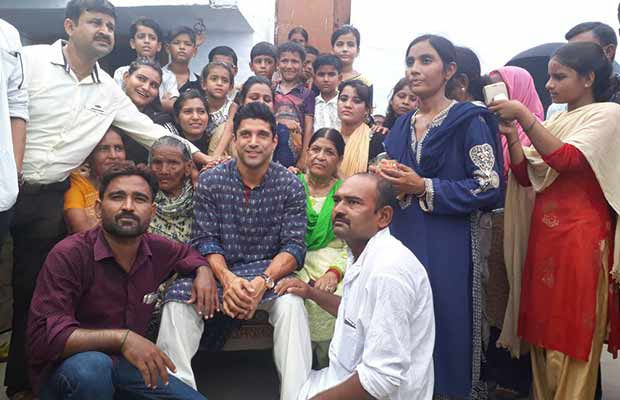 Farhan Akhtar recently took a trip to Khairabad to discover his roots tracing his ancestral legacy, where in he met his long distance cousins for the first time.

The multi talented star is better known as the urban guy born and brought up in Bandra, however, Farhan Akhtar is the descendant of a very renowned family in Khairabad.

The great-great grand father of Farhan Akhtar, Fazl-e-Haq Khairabadi was one of the main figures of the revolutionary 1857 Indian rebellion. The freedom fighter is most remembered for his protest against the British who was later sent to Kalapani. He was not only a revolutionary but also a philosopher, a poet, and a religious scholar. Fazl-e-Haq had also been a chief judge in Lucknow.

The entire family of Farhan Akhtar is closely related to literature. While Farhan’s father Javed Akhtar is a renowned lyricist and poet, his grandfather Jan Nisar Akhtar too was a renowned poet and a  lyricist for Bollywood.

Recently, Javed Akhtar had visited Khairabad and on his return advised Farhan Akhtar too visit their ancestral house too.The young Bollywood star was keen on learning his roots and hence visited his ancestral house in Khairabad. Farhan Akhtar also paid his respects to his great great grandfather by visiting his grave. There he met his second and third cousins connecting to his roots even deeper.

The actor said, “I was keen to learn about my roots and pay my respects to my ancestors. My first and second cousins, with their families, live there now.”

Farhan Akhtar was on a promotional tour to Lucknow for his upcoming film ‘Lucknow Central’, however, the actor took a detour to visit his ancestral property. He requested the film’s team to find a possible way to make the visit happen.

The ancestral property is a seven room bungalow with a garden and a backyard and is shared by four families. Talking about his ancestral house, Farhan Akhtar shared, “I’ve heard many stories about this place growing up and now, I’d like to know it better. In cities, everything grows rapidly and progresses fast, but in smaller towns like Khairabad, life is slow-paced. I want to put smiles on the faces of these children. I’d like to do for this place what Shabana and Baba Azmi have done for Azamgarh”. The actor referred to the Mijwan Welfare society’s work for children and women development.

The multi talented star not only visited his family but also interacted with the locals and children, spending almost five hours. Farhan Akhtar later paid respects to his ancestor by visiting the grave of his great grandfather Muztar Khairabadi’s mother, Heerma Khairabadi.

Farhan Akhtar shared his experience saying, “I’m overwhelmed by the love. I’ll definitely be back soon”.

The actor is currently gearing up for his upcoming release ‘Lucknow Central’ and visited Khairabad along with the director of the film, Ranjit Tiwari. 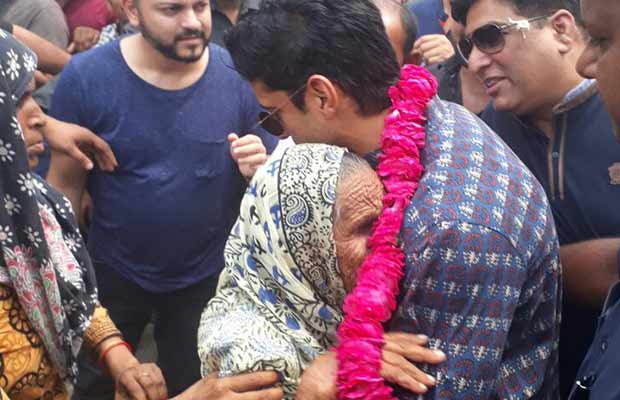