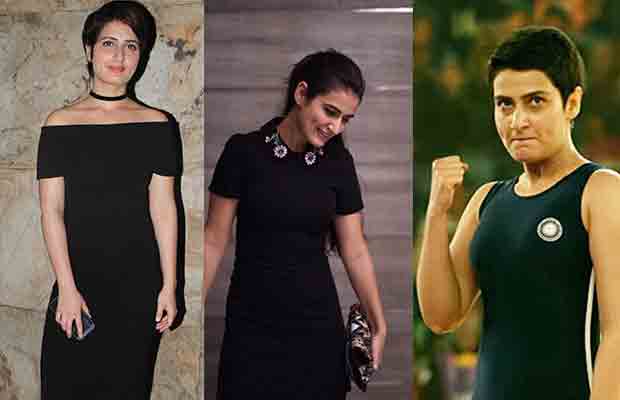 Fatima Sana Shaikh who was last seen in Aamir Khan’s Dangal as Geeta Phogat has been recently impressing us with the three sixty degrees transformation.

Fatima is currently shooting for her next release ‘Thugs of Hindostan’ alongside superstar Aamir Khan, where she will be seen playing a warrior.

The Dangal girl is leaving no stone unturned to perfectly blend into her new look. This look completely contradicts the previous one, leaving us all amazed.

In Dangal, Fatima carried the complete tom-boy look with bob – cut hair and athlete build, whereas in Thugs of Hindostan she will be seen in long hair and lean posture looking extremely gorgeous and fierce.

Fatima has been working out rigorously as a part her preparation for ‘Thugs of Hindostan’.

While we have always seen Fatima with short hair and dresses during the Dangal promotions, this transformation is very different from her previous looks and its absolutely great.

The actress has been captivating attention by pulling off some really amazing outfits in her recent appearances. The hair extensions perfectly complement her warrior look making her look prettier than always.

She was seen wearing a white dress paired with nude heels at a recent Film festival. Keeping the makeup simple, she left her hair open.

At Aamir Khan’s Diwali bash, Fatima appeared in a pretty traditional outfit. With a beige colored embroidered blouse and pink lehenga, the actress looked stunning. Her long hair tied in a pony added to the elegant look.

She is definitely taking the style game high!