The Dwarf And His Director: Shah Rukh Khan Will Be Seen In Pint-Size!

Shah Rukh Khan’s latest release, Raees, is a hit at the box-office. The film is inching closer to being part of the prestigious Rs.100 crore club. This does call for a celebration!

The superstar did give a Raees success party which was attended by many. But what caught our interest and eye is one of the pictures shared by Red Chillies Entertainment snapped at the party.

It was of Shah Rukh Khan and Aanand L Rai and it was captioned “The Dwarf and his Director”. In the picture, SRK is seen posing as if he is much shorter in height than his director. Aanand L Rai has given us memorable films like Tanu weds Manu and Raanjhanaa. Following which, Rai retweeted the same photo. He wrote, “This large hearted graceful superstar can go on his knees to make others look tall. wah re mere dwarf. ” 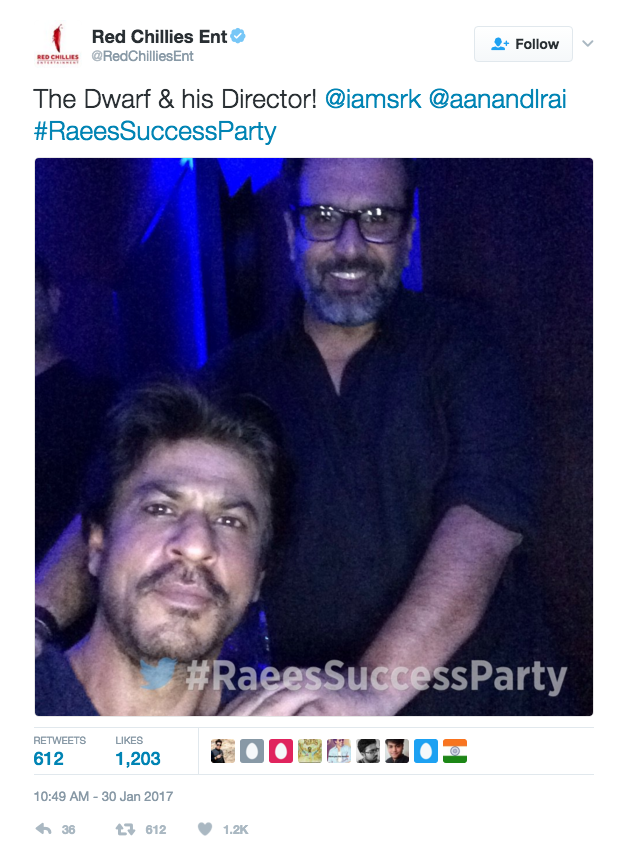 For all the uninitiated, a film with Shah Rukh has been announced where he is playing a dwarf. The film will go on floors in March, which will be extensively shot in Meerut and some portions in the US. The movie hasn’t been titled yet. But it already gotten everyone’s expectations rising as this is the first time SRK will be portraying the character of a dwarf.

But the director, Rai doesn’t like the label of ‘dwarf film’. In an interview he said that ‘dwarf is not the character’ in his film, but just defines the size of his character. The movie is nothing short of drama and romance of his characters.

As if SRK playing a pint-sized character wasn’t enough, that it has been reported that it’s a two heroine project. Names of Deepika Padukone, Katrina Kaif, Anushka Sharma already keeping the rumour mills buzzing!

Aren’t you excited to see SRK in a brand new size and same dose of romance?