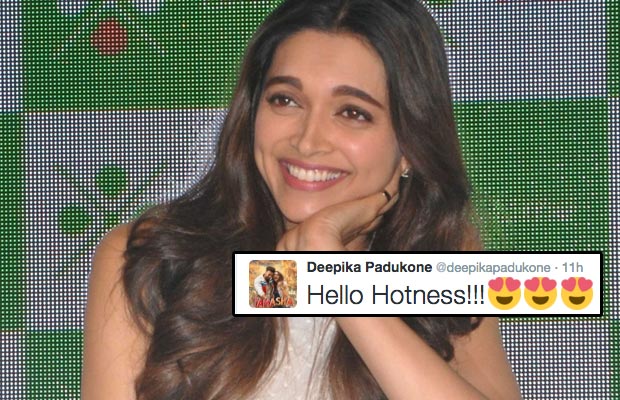 Social networking sites are nowadays like windows which let us enter the world and the life of our favorite celebrities, what is our star doing, what are his/her views and what she will do next we got it all figured out thanks to Twitter. Whenever a celeb is angry you will see him/her post it instantly on Twitter and even when they are in love some of them express it openly online.

Well recently we came across a post by Deepika Padukone calling her male co-star ‘Hot’. Well are there any guesses? Well the suspense is over and let us tell you that our glamour queen called none other than her reel-life and real-life hero Ranveer Singh ‘Hello hotness’ on Twitter. She came across the newly released poster of Bajirao Mastani and after seeing the fearless, macho looks of Ranveer all that Deps could say was ‘hot’. Well Deepika we totally agree with you, Ranveer indeed is looking hot, attractive and definitely desirable in the newly released posters. 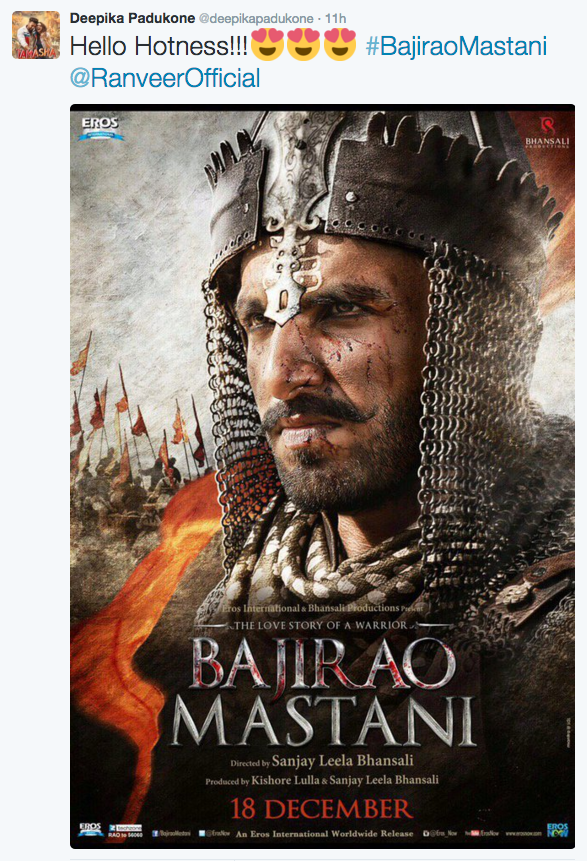 Sanjay Leela Bhansali’s most ambitious project Bajirao Mastani has been ruling the headlines lately. The look of the film has finally unveiled and is looking promising as ever.  The first poster of the film Bajirao Mastani revealed that the teaser of the film was out on July 16th. And finally we have caught hands on this hot and charging new poster of Ranveer from the movie.

With a dark and rustic background Bajirao Mastani, depicts a love story of a warrior, the greatness of the film can be discovered from its poster itself.  Ranveer will be seen in a bald look, the talented actor is surely ready to show his versatility by portraying Bajirao Peshwa in the film. The film is a biopic on the warrior Bajirao Peshwa and his life.

We will love to see the real like couple Ranveer and Deepika play reel like couple in this historical movie. Directed by Sanjay Leela Bhansali the film Bajirao Mastani will release on December 18th. The film is also gaining eyeballs as it will clash with Shah Rukh Khan Starrer film Dilwaledirected by Rohit Shetty. We are waiting anxiously to know more about the movie and behind the scene tales.