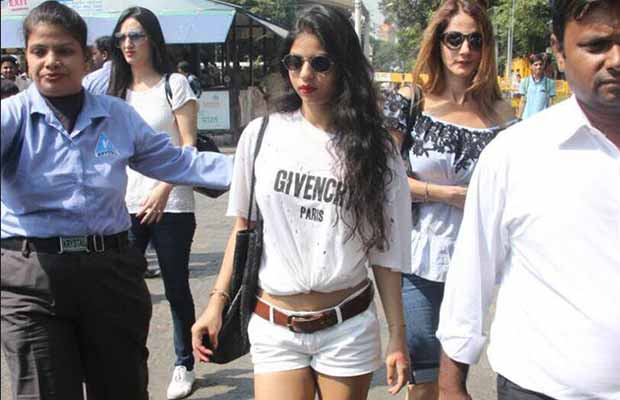 While Suhana Khan looks effortlessly chic, it did not come cheap!

The news of her Bollywood debut in the air and her no-nonsense fashion sense, Suhana Khan is one the most talked about star kids in the recent times. While jetting off to Alibaug for her father, Shah Rukh Khan’s pre-birthday bash Suhana Khan was looking like a fashion diva in the making.

Sporting a basic knotted white t-shirt, white shorts teamed up with a tan belt and white sneakers. What is not so basic is the price of her t-shirt. A whopping Rs 50,000, approximately. The 17 year old’s whole ensemble combined could probably fund the latest luxury phones in the market!

Even in her previous appearances Suhana has been seen sporting clothes, accessories, footwear from high end fashion labels and designers. Remember the time when she turned all heads while wearing a classic tangerine bandage dress? That dress was worth Rs 60,000, approximately. Also at a casual outing the star kid was spotted wearing sneakers worth Rs 64,000, approximately.

Now we all know Suhana is her father’s princess and Shah Rukh Khan is one of the most doting fathers in Bollywood. So naturally nothing is off limits for the King Khan’s Princess!