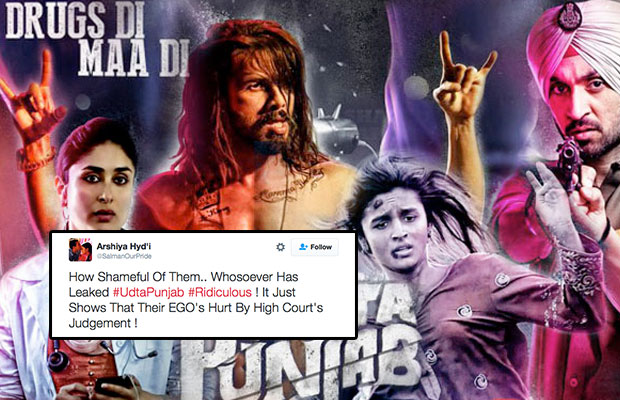 [tps_footer]Bollywood actors Shahid Kapoor and Alia Bhatt starrer Udta Punjab is in the news ever since it was announced. From impressive star cast to the realistic storyline, the film grabbed all the attention. Off late, the film also ran into major censorship trouble but the makers of the films went through all odds and won their battle. Udta Punjab makers burst into celebrations after Bombay High Court released the film with only one cut. Well, reportedly in the shocking turn of events, the major portion of the film has been leaked online. While some say that the FULL MOVIE is already available on certain websites. Soon after the news broke out, it created a buzz on the Internet.

Twitteratis came up with various reactions and some even claimed that CBFC has taken a revenge against the filmmakers for dragging them to High Court over Censorship controversy. Well, it’s shocking to know that just two days before the release, the film makes its way on the Internet.

The film, which has been cleared by ‘A’ certificate, stars Shahid Kapoor, Kareena Kapoor Khan and Alia Bhatt in the lead roles.  Directed by Abhishek Chaubey, the thriller will be having a drug mafia, and the characters of the film will be revolving around the storyline of drug abuse amongst the youth. Udta Punjab is slated to release on June 17.

Here’s what people have tweeted: 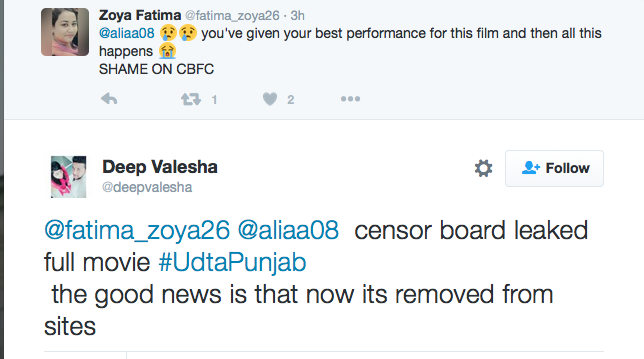