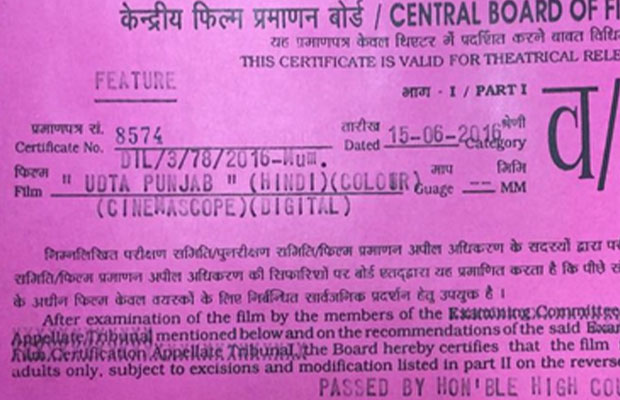 [tps_footer]We cannot be happier than this after we recently saw a tweet that is creating havoc. Everywhere.

Okay , we’ll tell you about this epic moment. Shahid Kapoor recently posted a picture of the CBFC Certificate for Udta Punjab! YES.

The CBFC have finally granted the certification to Udta Punjab that is slated to release on June 17th with an ‘A’ certification. In short, its time to celebrated.

Shahid tweeted the picture with the hastag “#win”. Indeed it is a winning moment for the cast and crew of the movie and also for us since we all have been awaiting the release of the movie. But even before things to escalate in the right direction. The producers and CBFC Chief Pahlaj Nihalani locked horns and begun their mud-slinging. After all that the movie has been through, this is a breath of fresh air and definitely a win-win for democracy! 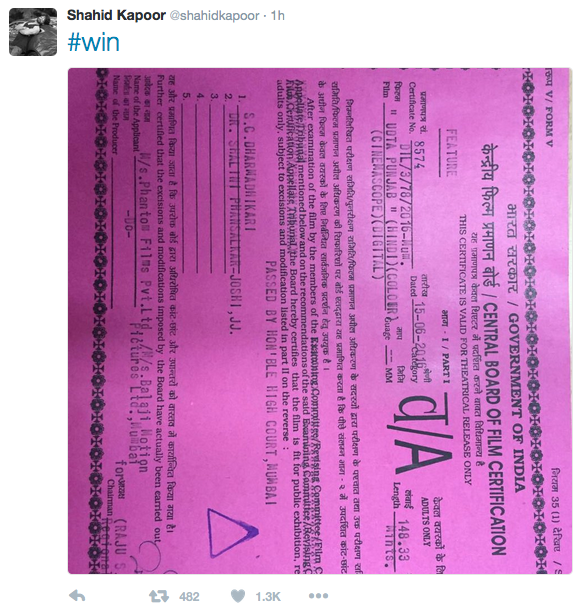 The battle had first begun when Anurag Kashyap got involved in a battle of words with CBFC, as they had demanded a whooping 89 cuts in the movie, something that is totally unthinkable of. Then, they took to the Bombay High Court and the Court finally passed the verdict in favour of the movie with only a singular cut that Anurag readily agreed to and the B-Town celebrated their victory over the autocracy of the CBFC. This is definitely a turning point in the Bollywood Industry especially for the film-makers.

In other words, Udta Punjab is releasing on June 17th and has a run-time of 148 minutes. Book your tickets guys, cause we are!