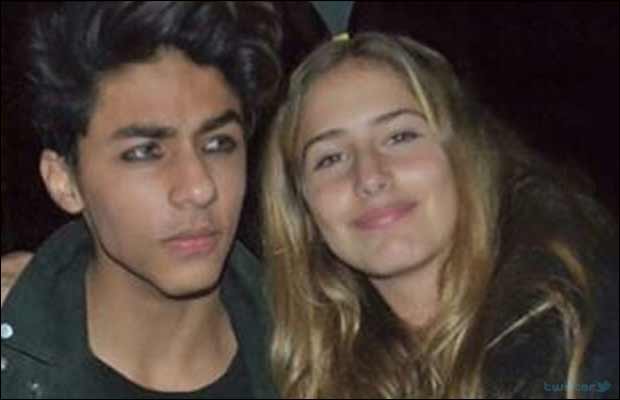 When it comes to style, attitude and romance, there is no one who can compete with Shah Rukh Khan, but well we have found someone who can give equal if not greater competition to the star, we talking about no one else but his elder son Aryan Khan.

Aryan Khan is turning into quite a stud and it is his good looks, the charm and the personality that he inherited from his parents are responsible for all the attention this smart looking boy attracts. We recently found a picture of this star kid where he was spotted wearing kohl in his eyes and posing for the camera with a girl who is supposed to be his friend. The dashing new kid on the block was seen wearing moss green jacket with a black tee. He had a certain attitude, a certain aura in his eyes which we loved.

We love your new hair and eye look Aryan and it will be really good to see a little more of you. Aryan, has been studying in London’s Sevenoaks School for his higher education shuffles in and out of town during his holidays but he is a real media-shy starlet and hence we hardly catch a good look of this little guy. One expects the son of Bollywood Baadshah aka Shah Rukh Khan to show some more love to his fans, but Aryan generally prefers hiding his face when accosted by paparazzi.

Well, we are lucky to finally catch a good glance of Aryan in this picture. We are totally loving the new attitude and new look of this star who is growing up to be quite a great stud and a star in the making.