‘Ittefaq’ finally takes off its shooting with the leads Sonakshi Sinha and Sidharth Malhotra. The two took on to social media to update about the film.

Well! The two shared a picture holding the clapboard of Ittefaq. 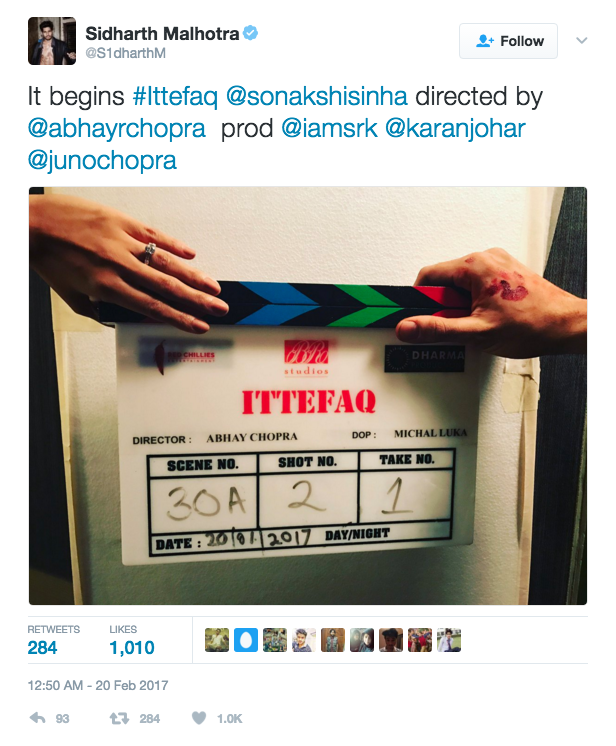 Like many films like Don, Agneepath, Sholay, Ittefaq too is all set to make its remake. Originally where Rajesh Khanna and Nanda played the leads, Sidharth Malhotra and Sonakshi will take over now.

The two have posted pictures with the clapboard and posted about the kickstart and wishes they need.

The clapboard shows Dharma and Red Chillies Entertainment which means the two have an association with the film. The original film was directed by Yash Chopra and directed by B R Chopra. This film too will be produced by B R Chopra mainly. But the credits for direction will be taken by Abhay Chopra.

The film will hit the screens by this year lately. Sidharth and Sonakshi are a fresh pair that we will get to see. Seems exciting! Talking about Sonakshi, she had earlier said that she chose the film because of the challenges it has.

She had said, “The story demands the character to be played from two perspectives. I found that interesting. It’s not completely black or white. It has some grey areas too, and that’s what drew me towards this film,”