During a debate on a TV Channel, Veteran actor Om Puri made a very shameful and insulting comment on the Indian Martyrs, who are fighting for the country. The veteran actor left many furious and soon Twitteratis slammed him over his ridiculous comment.  Om Puri ended up insulting Indian martyrs while defending Pakistani artists over the ongoing debate to ban them from working in India.

Talking about the same, he aggressively said, “We haven’t forced them to join army.” He further said, “Prepare 15-20 people as suicide bomber and send them to Pakistan.”

Well, with the latest news, a police complaint has been filed against actor Om Puri in Andheri over his insulting remark on the Indian soldiers. Many Bollywood celebrities have put their views on the ongoing debate but Om Puri’s reaction on the same has left everyone in shock. It’s quite ridiculous to see such statements coming from a veteran actor like Om Puri. 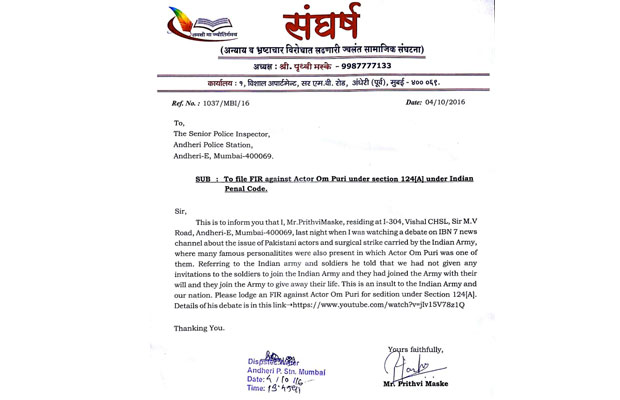 Om Puri had said that banning Pakistani actors will not change the situation and that politics and art should not be mixed. It is speculated that Om Puri is talking in support of the Pakistani actors, as he has worked across the border for many films and latest being is ‘Actor in Law’, a Pakistani film starring Mehwish Hayat.