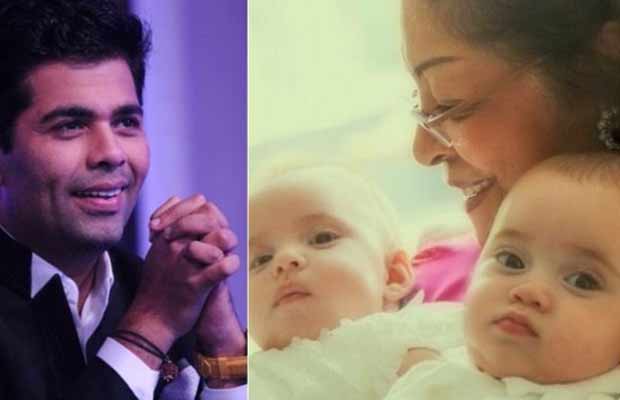 Karan Johar is a father to twins Yash and Roohi who were born through surrogacy.

The tables had turned for the Bollywood filmmaker Karan Johar when the super cool host became a guest at Neha Dhupia’s talk show No Filter With Neha. KJo is the one who usually grills the celeb guests at his show Koffee With Karan. But this time it was he himself who had to answer all the questions popped up by the actress. At the same show he was asked about his twins Yash and Roohi.

Other star kids like Shahid Kapoor’s daughter Misha, Shah Rukh Khan’s son AbRam, Kareena Kapoor Khan-Saif Ali Khan’s son Taimur, all of them have already given their public appearances. Neha asked Karan as to when his kids are going to appear in the public officially.

To this, the filmmaker replied by saying, “Kareena and I have decided, it’s Taimur’s birthday party. He is two months older than them. Taimur was born in December. So his birthday party is where Yash and Roohi will make their debut appearance.”

He seemed all excited about it as he also said, “Watch out Instagram! Because these three cuties are going to break the internet. I can’t wait for that photograph.”

Karan is father to the twins Yash and Roohi who were born through surrogacy. The filmmaker himself had announced the good news saying, “I am ecstatic to share with you all the two most wonderful additions to my life, my children, and lifelines; Roohi and Yash. I feel enormously blessed to be a parent to these pieces of my heart who were welcomed into this world with the help of the marvels of medical science.”