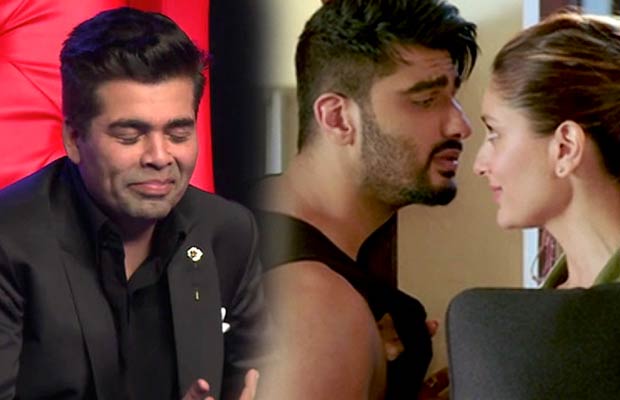 [tps_footer]Karan Johar is known to be the top A-lister producer and director of Bollywood. And recently, his movie Kapoor And Sons starring Fawad Khan, Alia Bhatt, Sidharth Malhotra, Rishi Kapoor, Rajat Kapoor and many more powerhouse performers have given a fabulous movie to watch out for and cherish family reunions and enjoy every minute of our lives with loved ones. And currently, this movie is busy collecting crores from the box office.

Karan was recently spotted at the screening of Ki And Ka along with Arjun Kapoor, Kareena Kapoor, Paresh Rawal, Akshara Haasan, Sarika, Swara Bhaskar and much more celebs who were extremely happy to watch Ki And Ka and were full of praises for this flick and Karan Johar had his way of describing this movie,

“The film is really amazing. The concept is new and fresh. It is a very unusual story and I think Arjun Kapoor and Kareena Kapoor have performed beautifully and did justice to their roles,” he didn’t stop here, he went on to give credit to R Balki for writing the story of Ki And Ka so well and for his vision. “R. Balki’s writing was entertaining. His shooting style is also exceptional. Fast paced, energetic and really unusual concept oriented film. I’d suggest that everyone should watch the film, it was really inspiring.”

Even Paresh Rawal couldn’t stop himself from appreciating this movie and he said, “A living breathing example of what a good commercial cinema should be. ‘Ki and Ka’ is an exemplary film.”

‘Ki And Ka’ is an upcoming romantic comedy-family drama written, directed, and produced by R. Balki. The film follows a young, married couple whose relationship challenges the gender roles placed upon women and men in the Indian society. The movie also stars Amitabh and Jaya Bachchan in special extended cameo. The film will be released on April 1, 2016.

So, we hope all this is exciting for you to know and decide to watch this movie or not. But, do tell us about your opinions related to the gender issues in the society and the concept of this movie, “Ki and Ka.”[/tps_footer]