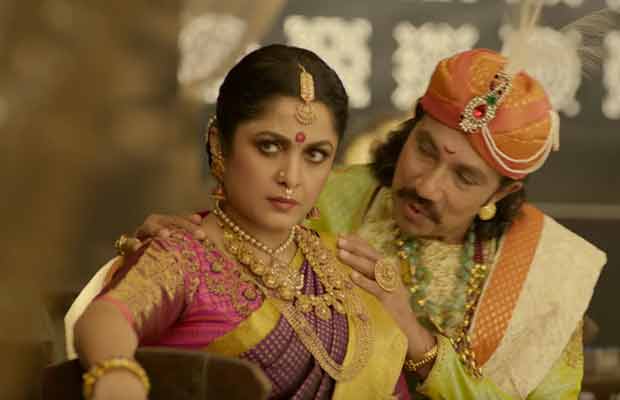 Sathyaraj aka Katappa and Ramya Krishnan aka Sivagami act as a couple in this viral video!

Wondering where Sivagami, the queen is romancing Katappa, the loyal slave? Well, it is definitely not in the film. But the two of the actors have come together as a royal couple for an advertisement.

Pothys, a textile showroom brand has used this opportunity of using the Baahubali actors for highlighting their brand. It is the best time for releasing the advertisement, as Baahubali 2 is doing unbelievably well in the cinemas and there is that craze in the public for the characters of Baahubali.

The commercial ad shows Sathyaraj in the role of a king and Ramya Krishnan as his wife. The ad features the king as someone who never refuses his wife for anything and gets her everything that she wants from the store. Quite expected, the video has gone viral on the internet!

Both the actors have become extremely famous in the nation. All thanks to SS Rajamouli’s Baahubali series and the amazingly written roles. While Ramya Krishnan plays Sivagami, the Rajmata of the Mahishmati kingdom, Sathyaraj plays Katappa, the loyal slave of the throne bearer in the film.

The film has been shattering all the box-office records and has reportedly collected Rs 700 crores in just seven days of its release worldwide. It is also being said that looking at the business that the film is doing, it is going to become the first film of Indian cinema to cross the 1000 crore mark!

Overwhelmed by the public response and the appraisal that the actress was getting for her role in the film, Ramya took to Twitter, thanking all of her fans. She tweeted, “Love you all. Without your love, affection and support I wouldn’t be where I am today. I am so overwhelmed. Jai Mahishmati.”