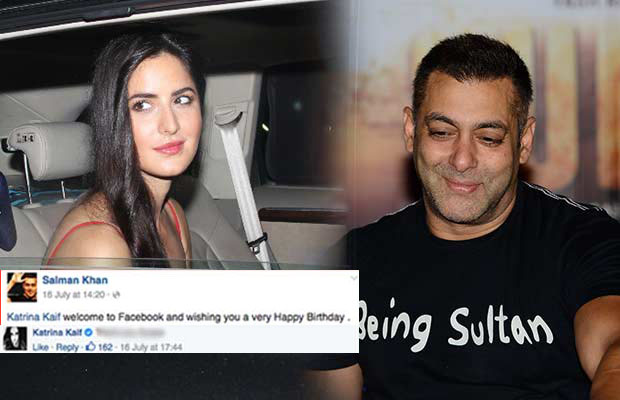 [tps_footer]Bollywood’s gorgeous actress Katrina Kaif who turned 33 on July 16, made her Facebook debut on her birthday. The actress, who was never active on any social media platform, chose to surprise her fans by joining Facebook, which happens her very first personal social media account. Katrina’s fans were very much thrilled and soon she received millions of likes on her account.

The birthday girl had also shared a video of her giving a view of her lavish apartment in Mumbai; reportedly it is the same house that she shared with her estranged boyfriend Ranbir Kapoor. However, with back-to-back likes on her Facebook account, there was someone special who surprised Katrina on her very important day. Any guesses? It was none other than Salman khan!

Yes, Salman Khan took to his Facebook page to wish her. Here’s what his FB status reads, “Katrina Kaif welcome to Facebook and wishing you a very Happy Birthday.

Salman also received a reply to it from Katrina herself. She replied Salman Khan, “Thank You Sultan.” 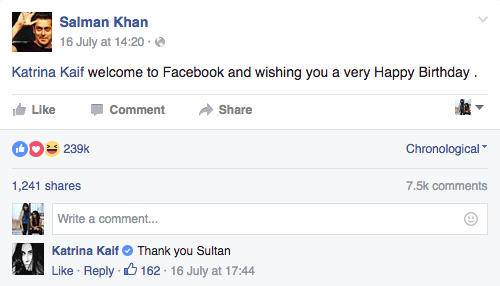 Isn’t that so cute?

So here’s the 24-second video of Katrina Kaif enjoying her life to the fullest and also asks her fans and followers to be “nice” and wish her as it’s her birthday.

Also, check Out how fans reacted on Katrina Kaif‘s reply to Salman Khan!