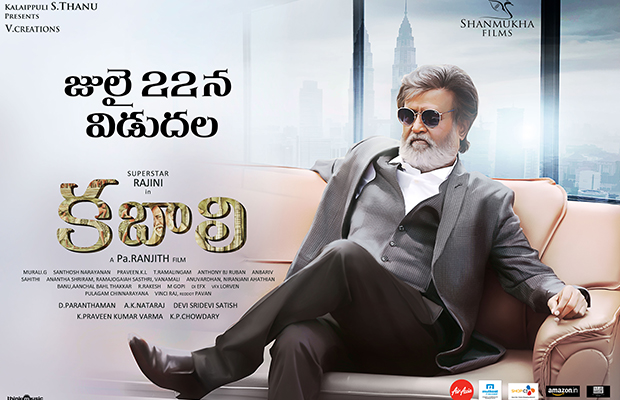 [tps_footer]Producer of the film ‘Kabali’ Kalaipuli Thanu seems to be all confident about the Rajinikanth starrer flick. The film which is one of the most awaited movies of the year is now nearing its release date. Just like Rajinikanth is the record breaker of the South film industry actor Salman Khan is the history maker in the Bollywood industry.

‘Kabali’s collections are going to be on par with Salman Khan’s ‘Sultan’, suggests the producer. The makers of the movie are sure that ‘Kabali’ will rake in 200 crores in the first three days of release like ‘Sultan’. The team of the gangster flick is super confident that Rajinikanth will again steal the show with his massive fan following.

‘Kabali’ is going to release in 12,000 screens across the world which is undoubtedly double than the Salman starrer. With more number of screens its box office collections will also widen. Above all, the first glimpse of ‘Kabali’ has received greater response than ‘Sultan’.

Coming to the other parts, ‘Kabali’ will be screened in 4500 screens in China, whereas it will be showcased in 300 screens in Japan and Indonesia.

The makers have not left even one sector unattended, and additionally Taiwanese actor Winston Chao’s presence in the film will do wonders for its collection in China. The producer commented saying, “Go to Mumbai and try to purchase a ticket of Sultan it would have cost you Rs 1500 , now you go to Bangalore and say Kabali, you will pay Rs 1500 per ticket, but let me tell you that in Tamil Nadu with just Rs 120/80 and 50 a ticket we will bring in 200 crores. So imagine what will happen then? We will be collecting ten times more than Sultan.”

Well, it can be surely said that ‘Kabali’ has all the factors to break ‘Sultan’s records!