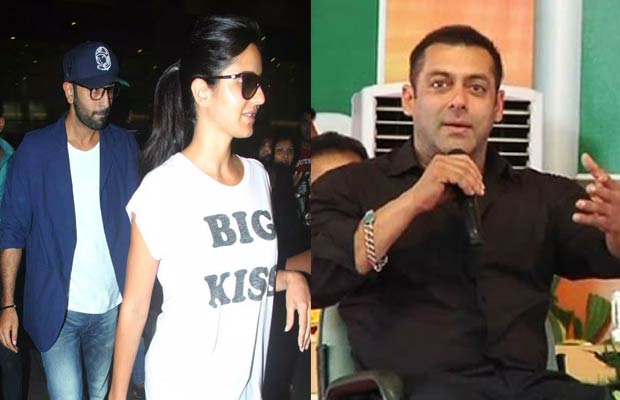 [tps_footer]As earlier we reported, at a recent event in Gondia, Bollywood star Salman Khan was in all praise for his former girlfriend Katrina Kaif after the actress gave him all the credits for her success.

Well, hinting on Ranbir and Katrina Kaif’s break up and their past holiday pictures, the reporter even asked Salman Khan on why Katrina Kaif thanks him for the success and clicks pictures with someone else on the beach (Ibiza beach pictures with Ranbir).

Well, it seems here Salman accidentally revealed that Ranbir Kapoor and Katrina Kaif have actually broken up. The actor replied saying, “I think that is a very old talk …I think the sides have now changed as that’s what I think …this is what I have heard from outside.”

Well, Katrina and Ranbir Kapoor’s break up has always been a limelight at every ‘Fitoor‘ event and once again the actress was asked about Salman Khan’s above comment.

To which Katrina gave a smart reply, which she has always been doing since last one month. The ‘Bang Bang’ actress responded saying, “I am Katrina Kaif and he is Aditya Roy Kapur (pointing at her co-star)…we can speak only on our behalf…I have no idea about what you are talking.”

Well, Katrina Kaif once again surely managed to get away from this question by being diplomatic. Her break up with Ranbir Kapoor is actually true or a gimmick that only time will tell better![/tps_footer]