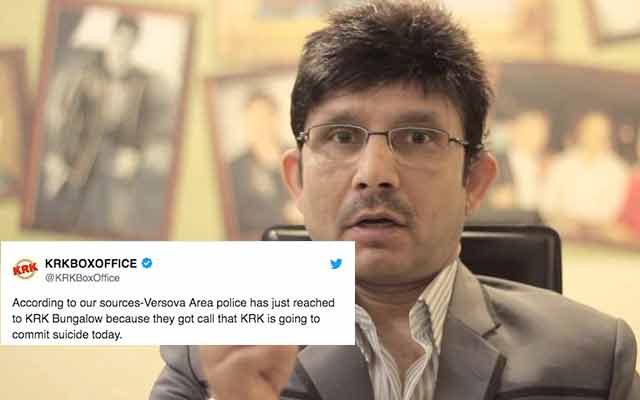 Twitter has suspended KRK’s account last month when he reportedly revealed the climax of the film Secret Superstar.

Kamaal Rashid Khan or as he popularly known, KRK has done it again. Although his official Twitter account still remains suspended, he is using KRK Box-office’s handle (The account through which he tweets film reviews and box-office collections) to send out his message. And this time he has crossed all his limits.

The man has openly threatened to suicide if his suspended account doesn’t get restored within 15 days.

Twitter had suspended KRK’s handle last month on October 18, when he had reportedly revealed the climax of the film Secret Superstar. He had even taunted Aamir Khan on the social media saying, “If u r not a good father or ur father was not a good father whom u never respected then don’t say dat we don’t love children.”

After the suspension, KRK Box-office had tweeted a picture which contained the self-acclaimed critic’s official statement.

He had said, “I have spent four years and lots of money to build my six million followers account on Twitter. Therefore, I will definitely go to court on Twitter to ask them to reimburse me the money and time I have spent on my account so far.”

But now, he is threatening Twitter to commit suicide. The trade analyst Atul Mohan has tweeted a picture contains KRK’s statement which says, “I request @TwitterIndia and staff Ms. Mahima Kaul, Viral Jani and Mr. Taranjeet Singhto restore my account within 15 days. 1st they did charge me millions of rupees and then suddenly suspended my account. So am depressed because they have cheated me. If they won’t restore my account, I will commit suicide and all these people will be responsible for my death.”

#KamaalRKhan aka #KRK requests #Twitter to restore his suspended account within 15 days or else he will commit suicide. Read below ? pic.twitter.com/xT6wICIsMt

Also, one of the latest tweets of KRK Box-office on the matter reads, “According to our sources- Versova Area Police has just reached to KRK Bungalow because they got call that KRK is going to commit suicide today.”

According to our sources-Versova Area police has just reached to KRK Bungalow because they got call that KRK is going to commit suicide today.

We wonder how far this man can go!