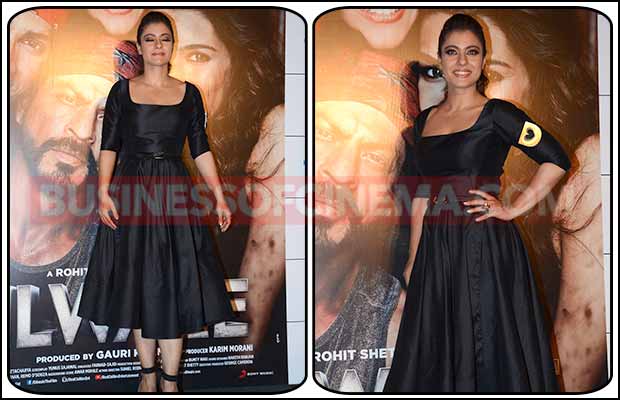 [tps_footer]Termed as the most expressive actress of the tinsel town, Kajol is all geared up to set the screens on fire with her upcoming film ‘Dilwale’. The diva who is not a slave of fashion and trends is nonetheless making the lenses drool with her style statements.

Kajol is known for her confidence and natural acting traits, the mind blowing diva will team up with Shah Rukh Khan in the film ‘Dilwale’. Both SRK and Kajol are known as the most romantic on screen duo of the tinsel town.
Well, even after being away from the limelight, Kajol is still glamorous and gorgeous in every way. The highly talented actress was dressed to kill at the trailer launch event of the film ‘Dilwale’. Kajol sported plain black knee length maxi attire designed by Swapnil Shinde. The head strong actress kept the accessories to the minimal and opted for a statement ring by Accessory Quotient. Keeping the monotone trend in mind Kajol opted for black high heel sandals by Zara.

Kajol is known to be a fan of comfort rather than trends, the actress gave her comfy look another blow by sticking to a high ponytail and appearing all fuss free. However, we can’t stop staring at her decked up detailed eyes.
The trailer of the film ‘Dilwale’ has already been unveiled and is creating a saga all over the place. With the impressive glimpse, the audience is waiting with bated breath for the film to hit the screens. Directed by Rohit Shetty, the film also stars actors Varun Dhawan and Kriti Sanon in lead roles apart SRK and Kajol.

The film is expected to be high on entertainment level as the trailer witnesses a concoction of action, drama and romance. ‘Dilwale’ is all set to release on December 18th, 2015.