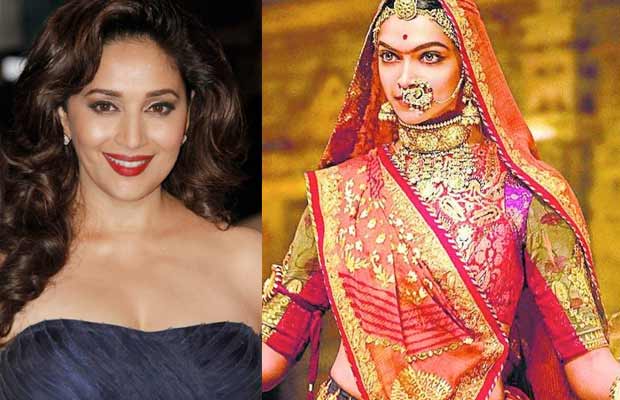 We recently saw two of the most beautiful and expressive women, Madhuri Dixit and Deepika Padukone pose together for a picture when they met at the recently held Marathi awards in Mumbai.

As they met, Madhuri Dixit immediately told Deepika Padukone how stunning she was in the song from Padmavati, Ghoomar.

The makers of Padmavati recently released Deepika’s song Ghoomar which received a fabulous response from fans on social media, critics and even celebrities. The way Deepika looked, the way she picked up the folk dance and the grace with which she performed has been extensively applauded.

But the compliment for Deepika becomes even more special when it comes from someone like Madhuri Dixit, who is even herself known for visually stunning songs and expressive eyes like in Maar Daala and Dola re Dola.

A source present at the award function also tells us how both the actresses also discussed their director in common, Sanjay Leela Bhansali.

He is known to have found his muse in both these actresses. Currently it is Deepika, considering his collaboration with her for the 3rd time back to back for Padmavati after Ram Leela and Bajirao Mastani.

Deepika’s Ghoomar song hit 10 million views in a very short span and the decision of the makers to release her song as the first song is being hugely applauded.