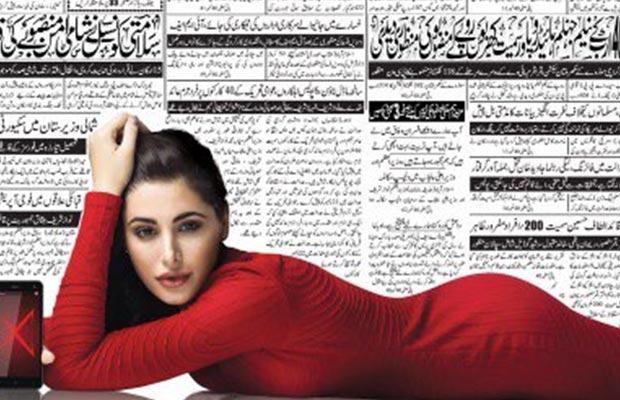 [tps_footer]Bollywood actress Nargis Fakhri is the second name of glamour. The actress, who is gorgeous and stylish, recently is entangled in a sensitive issue. Nargis landed in a hassle for an advertisement on the front page of a leading Pakistani Urdu newspaper. The starlet who is steadily making a mark in the tinsel town has been criticized for obscenity by many journalists and entities.

Nargis Fakhri drew loads of outrage on the social media for an advertisement which features her lying down with a mobile phone in her hand wearing a red gown. The ad is also being labeled as absurd and obscene by many.  Pakistani journalist Ansar Abbasi was the first one to put light on the issue and to comment on the same. Following him, many others gave similar opinions on the ad.  Ansar Abbasi took to the micro blogging site Twitter and tweeted, “My strong protest to top jang group management for this absurd front page ad in today’s jang.” 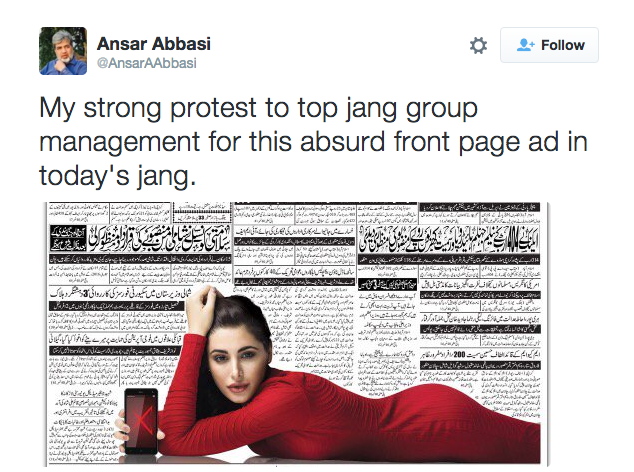 Some other tweets which followed were,

“@AnsarAAbbasi why newspapers are trying to be like pla*bo* or weekend type of magazine ?? These kind o adds look good in magazine not on NP.”

#NargisFakhri Culture, religion, ethics…This ad is wrong for so many reasons.But, Nothing’s gonna happen thats for sure.