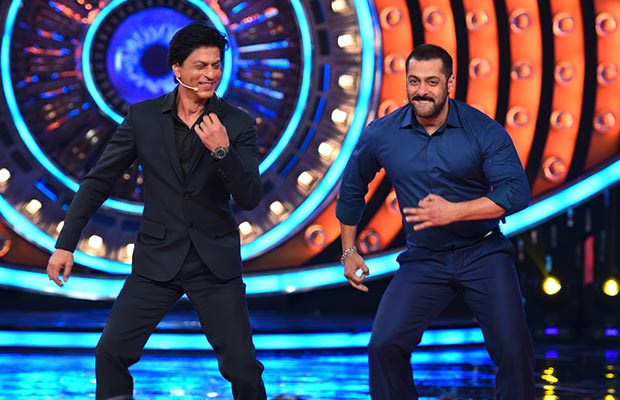 [tps_footer]When Shah Rukh Khan and Salman Khan are together there is bound to be some unavoidable action. The two superstars who are the new best buddies of the tinsel town have been in the limelight for their bromanceship since a long time. Recently, SRK and Salman filled the headlines with their appearance together on the reality show Bigg Boss 9. The two mind blowing actors who have the largest fan following filled the masses with curiosity with their reunion on the television.

Well, the promo of Bigg Boss 9 featuring Shah Rukh Khan and Salman Khan was being aired since a long time. Their appearance on the show together was also highly awaited by the audience. However, even though the fans enjoyed every bit of their presence, the promo of the reality show Bigg Boss season 9 which features Shah Rukh Khan and Salman Khan entering the Kali temple with their shoes on has now drawn attention.

The promo has received criticism from the Akhil Bharatiya Hindu Mahasabha. The leaders of the organization have contacted the channel Colors and have told them to remove this particular footage from the broadcast.

The promo has been shot for resembling their act in the film ‘Karan Arjun’. The glimpse was broadcasted for the special appearance of Shah Rukh Khan on the show Bigg Boss 9 where he came to promote his film ‘Dilwale’. Salman Khan who is the host of the show was also seen entering the shrine with his shoes on like Shah Rukh Khan.

The email regarding the feedback of the said promo reads out, “Not only temple, people don’t even wear their shoes in other religious places like mosques and gurudwaras. This is insensitive of all of you to have aired such content on your channel just for TRPs.”

Bharat Rajput, district president of the Hindu Mahasabha has opined, “I am shocked to see that a scene with Shah Rukh Khan and Salman Khan inside a Kali temple with their shoes on is being broadcast on TV for such a long time but no one has taken any action against it. Now if we say anything, we will be termed intolerant. But our religious sentiments have been hurt and before the final episode is broadcast on Sunday, the scene should be completely removed.”

National vice-president of Hindu Mahasabha, Ashok Sharma also commented on the issue saying, “If the actors were not that careful, at least the makers of the promo should have taken care that it is a religious set and should have not been tampered with. Our district president has also written to Colors on its feedback email id and asked them the reason behind such a blunder.”

Well, now what further turn this criticism takes is yet to be seen.