Deepika Padukone and Ranveer Singh will not share screen space together in Padmavati.

Ranveer Singh and Deepika Padukone have been an amazing couple both on screen and off screen. Last seen in Bhansali’s mega hits, Ram Leela and Bajirao Mastani, the two had signed their third project together with Bhansali for Padmavati.

Although the two were not bound in a romantic relationship in the film, the two had important scenes to be shown. Due to that, there had been severe attacks on the Padmavati sets by the Rajput community. The Rajputs put allegations of offence to the Rani Padmavati on the director and the team.

After that, the team called for a fair decision and this is what they’ve decided.

Well! They declared that Ranveer Singh and Deepika Padukone shall not share any screen space in the film.

This is what the Padmavati team wrote by taking on to Twitter, 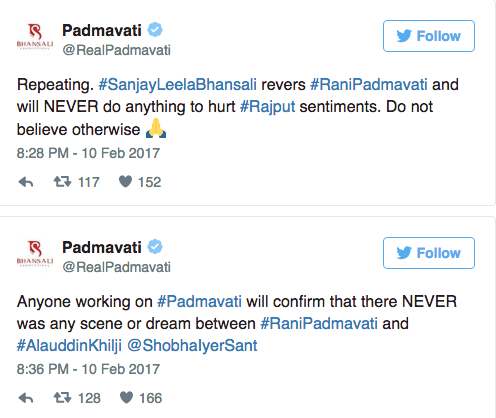 Now that’s really sad for the fans who have admired the couple for their sensational chemistry in the films.

Let’s see what happens next with Padmavati.