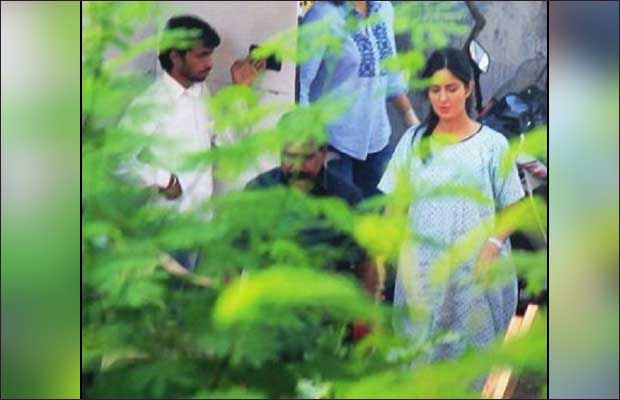 Bollywood actress Katrina Kaif is continuously busy with the shooting of her upcoming film Baar Baar Dekho with her co-star Sidharth Malhotra. Soon after the release of her last film Phantom, the actress visited London for the shooting of another film.

After wrapping up Baar Baar Dekho Glasgow schedule, the actress was then shooting in Goa for the same film. It seems her hectic schedule made her go sick, due to over pressure of working for the upcoming films. This is the reason for being hospitalized? Well, not really, we let you know that the actress is not hospitalized nor she is sick. After wrapping up Goa schedule of Baar Baar Dekho, Sidharth and Katrina began with the shooting of the film in Mumbai yesterday.

Well, you can see Katrina wearing hospital gown and bandages on her hand; it’s a sequence from the film. The shooting of this scene was done at a suburban hospital yesterday when the actress was clicked leaving in a hospital gown. So no worries guys, all’s well with Katrina Kaif!

Recently, the makers of the film had wrapped up first shooting schedule of the film in Glasgow. Soon after that, they begin with the shooting in Goa and now have landed up to Mumbai. After three or four weeks of shooting in Mumbai, the team will move to Thailand where the climax and romantic scenes of the film will be shot.

The film is being co-produced by Excel Entertainment and Dharma Productions and will mark the directorial debut of Nitya Mehra.  It will be shot across several international locations, and will be released in 2016.

Well, we are surely looking forward to what the film has for the audiences and that it is worth Baar Baar Dekho or not.