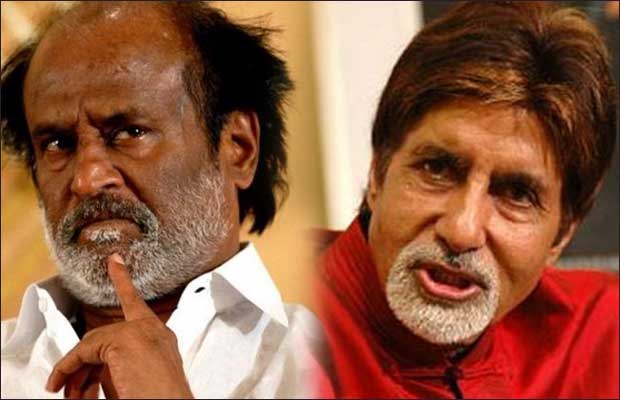 Looks like the old days are soon going to be back, as we might get to see Amitabh Bachchan and Rajinikanth share screen space once again! This time the talk of the town is that Big B is being eyed by director Shankar for a role in the highly anticipated upcoming movie ‘Robot 2’ starring Rajinikanth which has already entered its pre production leg. Both the stars have worked together for several films previously and it will be nothing less than a treat if Amitabh Bachchan nods a yes!

‘Robot 2’ has been creating news ever since the news of its making started doing the rounds. Also known as ‘Enthiran 2’, the film features gorgeous actress Amy Jackson in the lead role. Looking at the film’s sci-fi theme, we are guessing that Amitabh Bachchan might have a cameo role to play maybe dressed up as a scientist or a doctor. Something like Morgan Freeman’s role as Lucius Fox in ‘The Dark Knight’ series. That would be totally awesome!

On the other hand what we do know is who will be Rajinikanth’s nemesis in ‘Robot 2’! It is none other than Hollywood hunk Arnold Schwarzenegger who will be playing the role of a baddie in the film, much like his ‘Terminator’ avatar. The talks of Arnold joining the film have been doing its rounds for quite some time now and it has been revealed that the Hollywood hunk will be flying down to Indian in January 2016 for a shooting schedule of 25 days.

Apparently ‘Robot 2’ (Enthiran 2) is going to be a superhero film with a backdrop of love triangle, taking inspiration from Ramayana. Which indicates that Arnold Schwarzenegger will probably be the modern day robot version of Ravan! And now with Amitabh Bachchan‘s name being linked with the film, ‘Robot 2’ just keeps getting better and better!