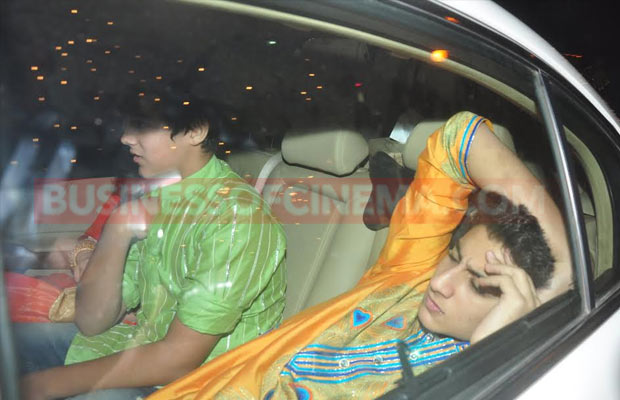 Saif Ali Khan’s son Ibrahim Khan is much in news lately for his social networking errands. The star kid who is fond of partying is spotted in a fun mode now and then. Well, this time too the much in news Ibrahim has created a buzz amongst the onlookers.

Saif Ali Khan and Kareena Kapoor Khan recently hosted a Diwali bash for their close friends and family. Amongst those who attended were Malaika Arora Khan, Karisma Kapoor, and Amrita Arora etc. Well, seems like Ibrahim was not a part of the household celebration and instead decided to celebrate this important day with another star kid at Bachchan’s bash.

The two super kids were spotted in casual ethnic attires all calm and composed. Ibrahim’s mother Amrita Singh was also present at the party while Aarav was spotted with grandmother Dimple Kapadia. Seems like, these kids are all happy with their close knit friends and family. The two handsome teens Aarav and Ibrahim surely surprised the lenses with their impromptu presence.

We can hardly wait for these glam filled teens to step in the tinsel town. With Ibrahim giving a miss to Kareena’s bash, the rumors of their minor tiff have already started making rounds. We hope all is well!