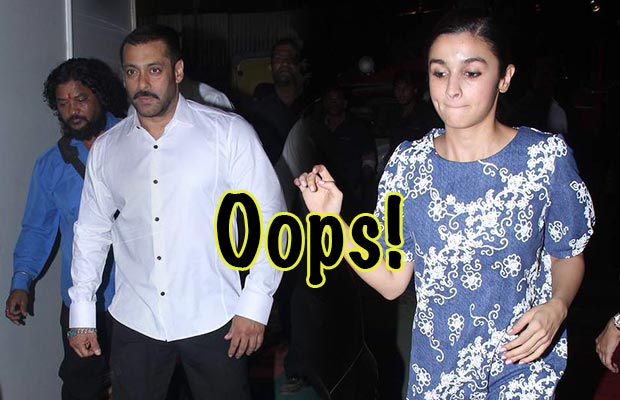 [tps_footer]Salman Khan and many other superstars are known for their not so punctual stints. Many actors have been blamed for not appearing at a certain event or function on time. This time too something on those lines has taken place. Salman Khan as we all know is always in a rush due to his busy and packed schedule, the superstar doesn’t even have a minute to spare currently due to his ongoing shoots and work commitments.

During the recent Big Star Entertainment Awards 2015, Alia Bhatt had to bear to the brunt of Salman Khan’s time hassles. Reports suggest that, Alia Bhatt’s performance for the event was scheduled at a particular time but Dabangg Khan took her slot and Alia’s performance was pushed to the end of the show.  Pretty diva Alia Bhatt had arrived at the venue according to the time given to her but Salman took her slot and this caused the delay.

Alia’s performance got delayed for another 5 hours and the actress had no choice but to wait. Salman who is known for his sudden change of plans hurriedly rushed to the act. The award night was not a very pleasant one for Alia’s health either. The mind blowing actress Alia Bhatt suffered from burns while she was performing on the stage.

The actress was all into the performance but the sudden burst of crackers on the stage caused her burns on the hand; Alia was then rushed for immediate medication. Well, seems like the most humble star of the Bollywood industry, Salman Khan gave quite a bitter memory of himself to Alia Bhatt.[/tps_footer]