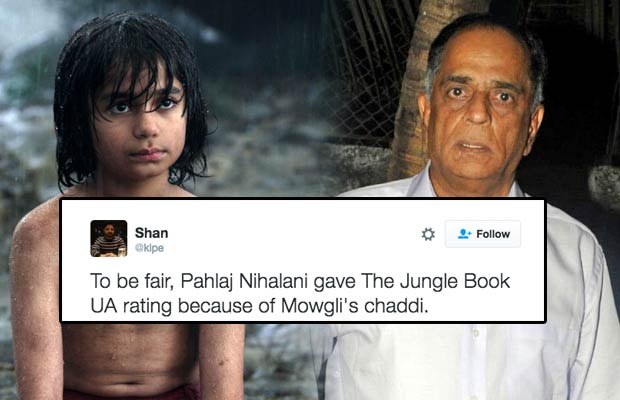 [tps_footer]If you thought the Censor Board Chief Pahlaj Nihalani is done with all the bizarre certificates and decisions here is another shocker. Pahlaj Nihalani is gaining all the headlines lately for all the wrong reasons. The Censor Board has yet again proved that it likes to stay away from logic and reasons. The film ‘The Jungle Book’ has finally released and one might never even imagine its evaluation in the CBFC.

The film which is mainly targeting the children has been given a U/A certificate by Pahlaj Nihalani. The reason provided for the unreasonable rating is that the film is scary in some of its sequences! The U/A certificate denotes that a particular film has mild violence or some other aspects which cannot be viewed by children under the age of 12. The said decision has yet again let down the Censor Board.

Just after the decision made its way to the masses, the Censor Board chief Pahlaj Nihalani was trolled badly on the micro-blogging site Twitter. Here are some of the angry tweets for the Board!

Pahlaj Nihalani gave Jungle Book a U/A probably because it scared him. Maybe they shouldn’t have kids in the censor board panel.#justsaying

Jungle book gets a U/A – which means Pahlaj Nihalani cannot watch it without an adult accompanying him.

Pahlaj Nihalani : The animals jump at you from the screen. Every other person : Its called 3D, you idiot!

Pahlaj Nihalani has given Jungle Book a U/A certificate. So many bare animals in the jungle must have really upset him

To be fair, Pahlaj Nihalani gave The Jungle Book UA rating because of Mowgli’s chaddi.

What happened to Pahlaj Nihalani? U/A certificate to Jungle Book! Thank God it’s not A. Non of the chimps, monkeys, hyenas wearing clothes.

Pahlaj Nihalani never fails to amuse me, he is better than any stand up comedian across the globe. Now Jungle Book us U/A because its scary!

Pahlaj Nihalani gives a UA to #TheJungleBook, the quintessential kids story, citing it’s too scary. When will he stop embarrassing himself?