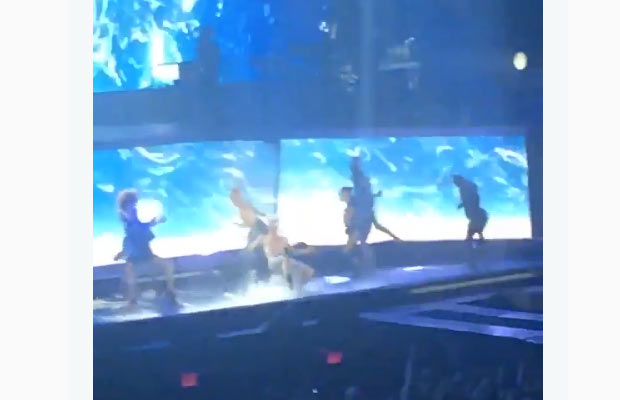 [tps_footer]Hollywood sensation Justin Bieber released his brand new studio album ‘Purpose’ last year in November 2015 and is currently on a world tour for the same. The 21-year old singer is performing at biggest stadiums with sold out shows.

Justin Bieber brought his ‘Purpose’ world tour to Sprint Center in Kansas City on April 6, 2016. The singer performed on most of his songs from latest album. With dancers, rain and some VIP guests, the venue was jam packed with beliebers. It looked like a great concert until Justin had a fall. Justin was performing on his ‘Sorry’ and there was rain on stage. His backgroud dancers are dancing when Justin slides down and trips. Wait a minute, he was shirtless too. He falls hard for a brief moment but we all know he doesn’t stop. Being a true performer that he is, Bieber stood up and carried on with his song entertaining the audience. Also, notice that his dancers are so professional taht no one even for a second stopped performing when he tripped. Well, that is how it should be.

Justin is touring the world after more than two years and getting immense amount of response. The singer also cancelled his pre-show meet and greet with fans recently because he was exhausting him a lot before his performance. And the beliebers understood it. His album released the same day as One Direction‘s ‘Made in the A.M’ beating the boy band in taking the No.1 spot.

Here is the video of Justin falling from multiple angles.