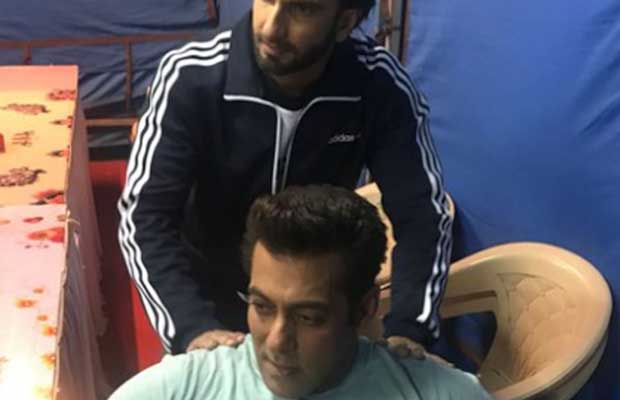 After Deepika Padukone, Ranveer Singh meets Salman Khan and the pictures of two are going viral on the Internet. Recently, Deepika visited on Bigg Boss 11 sets for the promotions of Padmavati. The actress played some fun games with Salman Khan after visiting the controversial house.

The Dabangg star asked Deepika who’d she like to kill, marry and hook-up with between her Padmavati director Sanjay Leela Bhansali and co-stars Shahid Kapoor and Ranveer Singh.

Then, Deepika also asked the same question with options Katrina Kaif, Deepika Padukone and Jacqueline Fernandez. Salman Khan replied saying that marriage is never on his list and that he will kill and date all the three actresses.

Well, now Ranveer Singh has visited on the sets of Race 3 to meet Salman Khan. As we all know Salman Khan has begun shooting for Remo D’Souza’s film ‘Race 3’ and ‘Padmavati’ actor dropped on the sets of their film. The energetic actor brought laughter and also gave some shoulder massage to Salman Khan, as seen in the photo.

Ranveer Singh poses with producer Ramesh Taurani and director Remo D’souza on the sets of Race 3.

Race 3 is a multistarrer that also stars, Bobby Deol, Jacqueline Fernandes, Saqib Salim, Daisy Shah, among others. Directed by Remo D’Souza, Race 3 is slated for an Eid 2018 release.