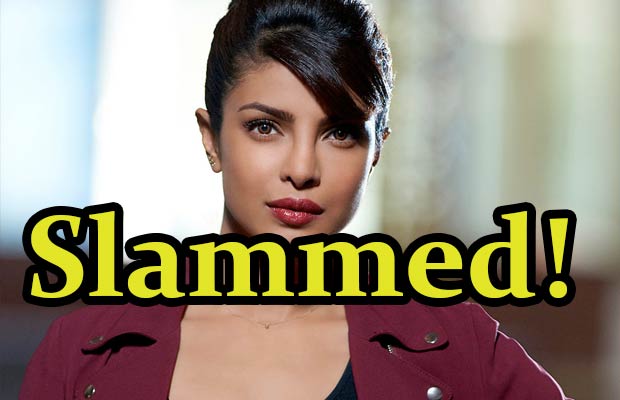 [tps_footer]Priyanka Chopra is one actress who has always been in the good books of her fans. The beautiful actress is not only known for her killer looks but is also the perfect one when it comes to acting. Priyanka is an equally famous star in the Hollywood industry. The girl next door recently started her production house wherein she aims to target the regional belt.

With all the good news showering upon her PeeCee has landed in a sensational hassle. The Quantico starlet is quite in a mess because of her maiden Bhojpuri production. Priyanka’s first regional project released on Friday and is titled, ‘Bam Bam Bol Raha Hai Kashi’. The state is highly disappointed with the film and the content of the movie is also being termed as vulgar and distasteful.

The Bhojpuri film stars actors Dineshlal Niarahua and Amrapali Dubey in lead roles. Apparently, the Baywatch star is being bombarded with open letters from various authorities for the film. Priyanka on the other hand, is also being blamed for disrespecting the Bhojpuri industry. Many claim that the film is doing nothing to better the impression of the state and is in fact ruining the industry more.

Nitin N Chandraa who is a National award winner termed the film as vulgar and confessed, “At a time when my mother tongue Bhojpuri is fighting for its existence, Priyanka has not only defamed herself but also besmirched her Padma Shri award by producing a movie like this. I am extremely hurt. I will write an open letter to her.”

Apart from Nitin N Chandraa, Kunal Dutt who runs a campaign for saving the historic Dutch made Patna Collectorate from demolition, expressed hate for Priyanka Chopra on the social networking site Facebook in a long open letter.

Well, now what turn does this issue take is yet to be seen.[/tps_footer]