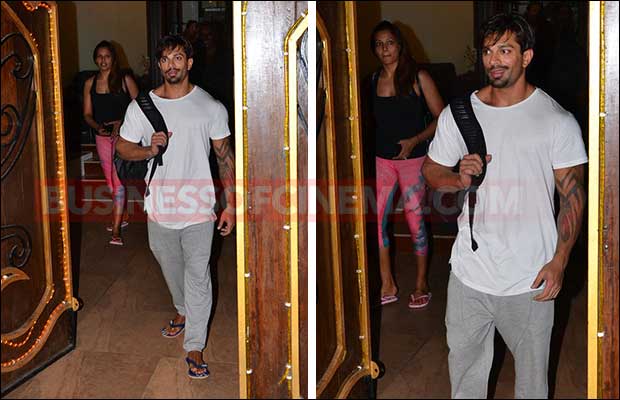 [tps_footer]Karan Singh Grover, finally opens up and speaks his heart out. He never discussed his personal life with media earlier, and never bothered much about the negativity he has received for divorcing twice in his life, but he continued to stay focused in his work life even when his personal life was discussed by every leading daily, tabloids. On a professional front, he is going ahead with a lot of good projects, Hate Story 3 proved to be a massive hit and gave him more reasons to celebrate other than finding a stable relationship in his new rumoured ladylove Bipasha Basu. None of them are Alone now !!

According to a leading daily, Karan Singh Grover disclosed his feelings about being a celebrity, his past relationships and the present relationship, the amount of time he needs to set himself free and just move on more ahead in his life and career, “the actor has been quoted as saying that whatever there is between Bipasha and him, he wants to be able to say it when he is ready. He asks for time reasoning that with his upcoming films, his life has been under a Domino effect. The duo are also very active on social media and can be seen sharing some cosy moments. However, seems like if Karan had his way, that wouldn’t have been the case. He says, if he had his way, he wouldn’t share his personal life online. He confesses that he is a private person and that at home, he doesn’t wander around shirtless, flexing his muscles. He further elaborates that he instead roams around unshaven, with disheveled hair. He rues the fact that people perceive celebrities differently but also dismisses it by saying that people are free to speculate.”

It was also reported by various portals that Bipasha and Karan have been engaged as some spotted a big diamond ring in Bips ring finger and that they were ready to tie the knot by April, but their families didn’t approve this relationship. It was said that Karan‘s mother, doesn’t see a daughter in law, in Bipasha Basu with her past relationships with John Abraham, Harman Baweja and break up series. On the other hand, Bipasha‘s mother, reportedly, asked Bips to stay away from Karan Singh Grover for being two times divorced and never being in a committed relationship. But both of them have been unlucky in love so maybe they can find love in each other. And they are still going strong even after the news of their families not being in their favour to carry on with their relationship.

We hope things work out for them and both, Karan Singh Grover and Bipasha Basu, never have to go through a heart break ever again.[/tps_footer]