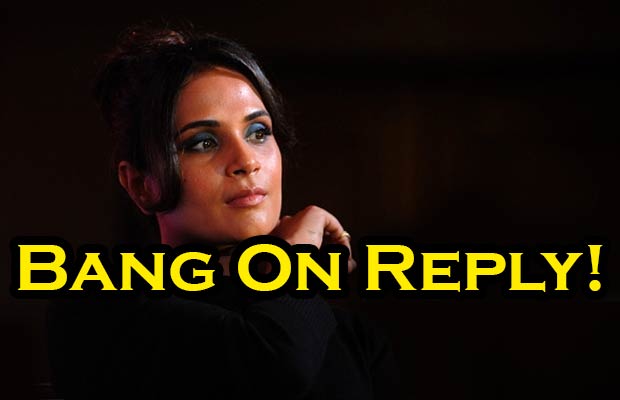 [tps_footer]Richa Chadha is one actress who is gutsy to the core. The highly talented actress who is a numero one when it comes to fitting into the shoes of the character  is also not behind in giving mind blowing replies to the trolls. Richa like many other Bollywood celebrities was targeted by a troll; the actress instead of ignoring the matter gave a daring reply to the same.

Even though Richa is loved by many, the actress has some haters. The mind blowing diva decided to give these haters a taste of their own medicine. One of the users joked at Richa’s surname and further asked her if she had a factory of undergarments.

The daring girl that the Sarbjit actress is, she replied to the user in the same manner saying that the user looked like a scary dog; the actress further also asked the hater if he wore any undergarments.

Richa Chadha is showered with loads of praises all because of her strong acting skills. With this dare devil reply we are sure no one would again take a chance to take a dig at her.

Richa was last seen in the films ‘Sarbjit’ and ‘Cabaret’. Well, we are proud of you girl![/tps_footer]