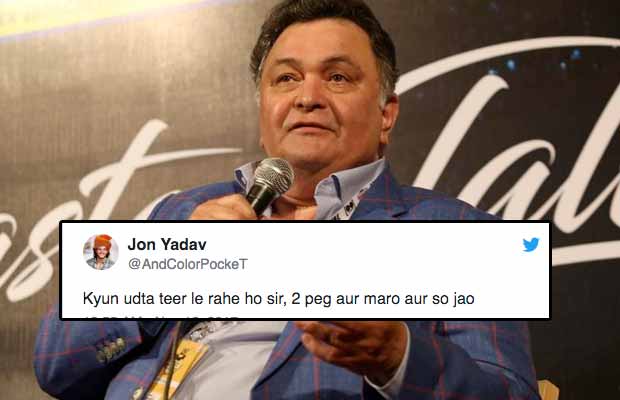 Veteran Bollywood actor, Rishi Kapoor has stepped into a controversy again because of his twitter rants. Rishi Kapoor in his tweet has agreed with Farooq Abdullah’s opinion that Pakistan-occupied Kashmir (PoK) belongs to Pakistan and no matter how much the two nations clash PoK will still be Pakistan’s.

National Conference (NC) president Farooq Abdullah on Saturday said,”J&K is landlocked and surrounded by nuclear powers China, Pakistan and India. All three of them have atom bombs. We have nothing except Allah’s name. Those who are talking about Azadi (freedom) are talking wrong,” the former Chief Minister told cadres at the party headquarters in Srinagar.

After Abdullah’s statement reached the news, Rishi Kapoor in a midnight tweet stated:

Farooq Abdhulla ji, Salaam! Totally agree with you,sir. J&K is ours, and PoK is theirs. This is the only way we can solve our problem. Accept it, I am 65 years old and I want to see Pakistan before I die. I want my children to see their roots. Bas karva Dijiye. Jai Mata Di !

Rishi Sir, Aapke hak ka koi lega then you realise pain of Indian public. Please don’t do such statement & keep your views with you only. we should never forgot what scarifies they did for us

You are always welcome ans respected here in PAK, but if THEY solve Kashmir issue, the how do they Rule the people of both Ind and Pak??

This guy has probably gone senile with his rants. Does he know why so many soldiers lay their lives down? It is called defending country against all odds. To expect that from a stupid Bollywood actor who went round trees will be too much to expect

65 years old? No wonder your loosing it , becoming senile day by day. How about packing your bags and moving out to your beloved Pakistan. Trust me you won’t be missed

The root that Rishi Kapoor was talking about in the tweet is the ancestral Kapoor house that was built in the prepartition era in Peshawar.